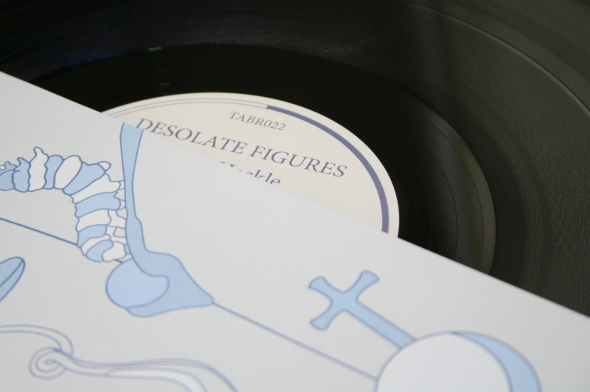 Since his debut album The Second Son fully heralded his arrival on the scene, John Heckle has represented nothing less than a fist-pumping power station within the hustle and bustle of global house and techno. His releases have been plentiful, but moreso his presence in the live arena has been hard to ignore. Certainly not one to shy from putting the work into his performances, his live sets are a jackhammer machine opera constantly steered and manipulated by his own hands, while his DJ sets sport additional drum machine action thrown into the mix lest we all lose focus with the searing blend of acid, proto house and techno he throws down.

While The Second Son, released on Jamal Moss’ Mathematics imprint, was undoubtedly a fine collection of tracks, it betrayed Heckle’s relative youth in releases (despite some early dalliances as Hek), coming off a little disjointed as a body of work and sporting some jarring elements that at times impinged upon the music itself. From the outset, Desolate Figures speaks of an artist more firmly rooted in his craft, realising ideas with poise and assurance as much as brash imagination and production brawn.

In the opening strains of the album, namely “Blindman’s Bluff” and “Inhuman Nature”, there is an undeniable note of soundtracks hovering overhead, especially in the former’s arresting string arrangements that hang heavy on a shimmering patter of drum machine hats. The latter reveals its cinematic colours as the track progresses towards its finale, taking time to reveal the Carpenter-esque languid synth notes, and it’s at this point that you realise how refined and progressive Heckle’s productions have become. As his live sets attest, he can take you on all kinds of a rollercoaster full of dizzying dynamics and hi-octane composition, but now he seems capable of teasing out those thrilling moments and balancing them with patience, and it makes the music all the more impressive.

“Frankenstein’s Sweet Nectar” moves away from the dramatic orchestrations and into a more light-hearted temperament, part industrial stomp and part joyful acid reverie, without once touching on saccharine (the dreaded trapdoor that keeps most dance producers well and truly in the minor keys). Meanwhile “Something For Your Distorted Mind” moves into a curious kind of grainy wig-out-jacker, Heckle’s impressive skills on the keys shining through the sonic crud to strike a mood not common in the field of analogue dance music. It’s an abstract feeling more commonly felt in the wilder fringes of jazz, and it’s refreshing to find such adventurous emotions coming through on a contemporary electronic record.

That jazzy notion gets extrapolated on “Death Of A Spaceman”, which takes on a wild streak fit for the likes of Terrence Dixon as a breakneck tempo and atonal notes whip up a frenzy of militantly futuristic techno, getting ever more feverish as the track progresses. There’s little let up later into the album, even if “Never With You” sports plenty of fluttering melodies in amongst the splashy drums, but what really shines through is that this is still unmistakably a John Heckle record. The brittle percussion on “Crazy Metal” sees to it that you can identify the Liverpudlian’s way with machines, and it calls to mind the first album just as it darts ahead of it.

Second albums are always a pivotal moment in setting the angle at which an artist will arc, and Desolate Figures sees John Heckle pitched perfectly for a smooth ascent towards being one of the all-time greats of fiery, gutsy analogue electronic music.

A1: Blindman’s Bluff
A2: Inhuman Nature
B1: Frankenstein’s Sweet Nectar
B2: Love-Lies
B3: Something For Your Distorted Mind
C1: Death Of A Spaceman
C2: Crazy Metal
D1: Never With You
D2: Power Of Two