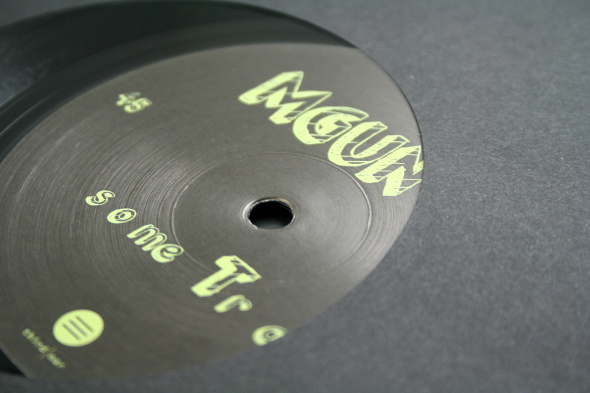 On recent releases for The Trilogy Tapes, Don’t Be Afraid and Berceuse Heroique, Manuel ‘MGUN’ Gonzales has worn the influences of his hometown Detroit clearly, moving through techno, house, electro and ghetto. However for this debut on the Third Ear label there is little trace evidence of the Motor City’s legacy. If there is one lingering characteristic however, it’s the raw, lo-fi approach to production that Gonzales now shares with artists like Omar S and sometime label mate Kyle Hall.

It’s only a tenuous connection however, and for the most part, the Some Tracks EP sees him sail off the charts and embrace the abstract. “Taft” is nothing more than a series of frequency shifting tones and textures, a low-key finale to the release, but it does not exist in isolation; on “Mask” and “Fiber”, Gonzales uses similar elements, aligning them to more dance floor friendly rhythms. The former unfolds to the sound of chiming bells and rasping percussion, teased out over broken drums, while the latter is all about Gonzales’ use of tonal frequencies; underscored by dense swathes of percussion, the arrangment frequently veers off into freeform abstraction.

There’s no such distraction on “Meanwhile” however; distorted, broken and noisy, it could so easily have descended into an unspeakable racket, but Gonzales holds it all together through the use of a freakishly dark bassline that brings a sort of rumbling cohesion to the disparate elements. “On ‘Extort” sees Gonzales finally gets down to more direct dance floor business.  The drums stomp abrasively, filters wind their way mercilessly through the track and snares come crashing in like “Spastik” reimagined for an audience weaned on L.I.E.S. and The Trilogy Tapes rather than Plus 8 and Transmat.

The abrasive production sound and off kilter rhythms may be a surprise for fans of a label such as Third Ear, but releasing Some Tracks is very much in line with their policy of snapping up the best talent that Detroit has to offer. For that reason alone, this release makes perfect sense.