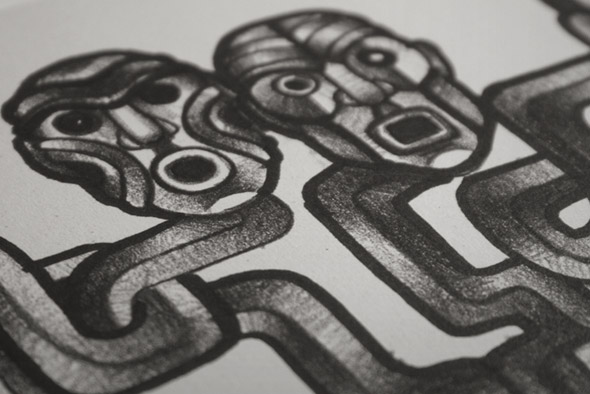 This may be hard to take for anyone schooled on “In from the Night” and “Booster” or who discovered Planetary Assault Systems via the Temporary Suspension comeback album, but for his debut L.B. Dub Corp long player, Luke Slater has made an excellent and in places 90s-referencing house music collection. Unusually for the UK producer, it sees him bring his British identity to bear on his work, drawing on the legacy of sound systems and Ragga MCs.

This is most audible on the album opener “Take A Ride” which features poet Benjamin Zephaniah on vocals, steely drums and a robust bassline that support his resonating tones, rising up smoke rings through the dubbed out chords. Zephaniah makes another appearance, this time on the less reflective “I Have A Dream”. In essence, Slater and his celebrated collaborator have delivered a wry riposte to all of those Martin Luther King-sampling house tunes, the 4/4s replaced by dense break beats and the civil rights activist’s text replaced by aspirations that in the future everyone will ‘have at least one Barry Manilow record’ and ‘the curry will blend with shepherd’s pie’. Slater walks that very fine line between parody and self-parody – a border he unfortunately crossed on 2002’s Alright on Top – but the interplay between Zephaniah’s ramblings and the hymnal synths means it does not descend into silliness.

Elsewhere, Slater shows he is as inspirational working within the house form as his techno work. “Nearly Africa” starts with hypnotic chants and a seismic dub bass, before an uplifting female vocal and beguiling, Bobby Konders-style keys kick in, steering the track from London to New York. “Ever and Forever” is even more impressive, with Slater fusing icy synths, eerie strings and a brooding bassline with insistent, shaking hats. It’s reminiscent of vintage Aaron Carl, statuesque in its delivery.

Unknown Origin doesn’t see Slater forsake his techno background entirely; Function is drafted in for the toughest track, the firing percussion and heavy filters of “Roller” and dark drums crash and glassy percussive shards shatter on “L.B’s Dub”, but the album’s real strength lies in its author’s ability to turn his hand effortlessly to a form he has previously only touched on.