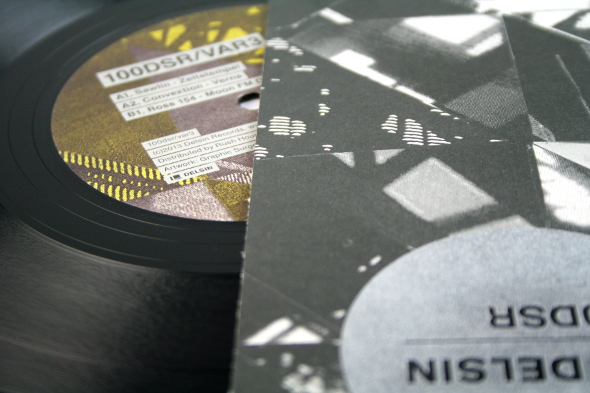 The third instalment of Delsin’s 100DSR/VAR anniversary celebration sees the revered label return to its roots – but in so doing, is it refusing to move on? It’s a valid question. The retro-mania culture that has been a prominent feature of electronic music over the past half-decade has yielded some fascinating results, with artists like Kyle Hall and MGUN, as well as labels like L.I.E.S providing unique interpretations of what had come before them. But it has also led to a glut of mediocre, backward-looking releases and the sneaking suspicion that for some artists and labels, middle-age is defined in the truest sense of the term, an excuse to put out the musical equivalent of a glass of dry sherry and a comfortable jumper.

In places, 100DSR/VAR 3 relives its early days; Jochem ‘Newworldaquarium’ Peteri’s contribution, “Moon FM Desire” as Ross 154, was originally released on the Delsin compilation, Going Thru Life in 2001. Despite its age, it does not sound dated, as eerie synths from the depths of winter play out over crashing snares and cymbals.

At the other end of the spectrum, there is “Zeitstempel” from recent Delsin signing Sawlin. Though built on pounding kicks, it lacks the morose, joyless feeling of industrial-themed techno; dank clouds of acid filled static hover and hum over the crunchy, stepping rhythm and the bursts of noise crackle and screech like a cartoon character sticking their finger in a plug socket. Of course this would not be an approved Delsin track without some element of depth and the swirling synths that insinuate their way as the arrangement progresses provides a taster of sorts for the release’s third and final track, Convextion’s ‘Verna’.

It’s been a while since Gerard Hanson has put out music under this guise, preferring instead to focus on his ERP project. Consider this contribution a bridge between both projects; it has the emotive synths and angelic pads of his recent releases as ERP, but the snaking, acidic bass and nagging percussion are unmistakably Convextion. The common feature however, is Hanson’s ability to take existing tropes and make them his own, a quality that has also ensured Delsin’s longevity over the years.