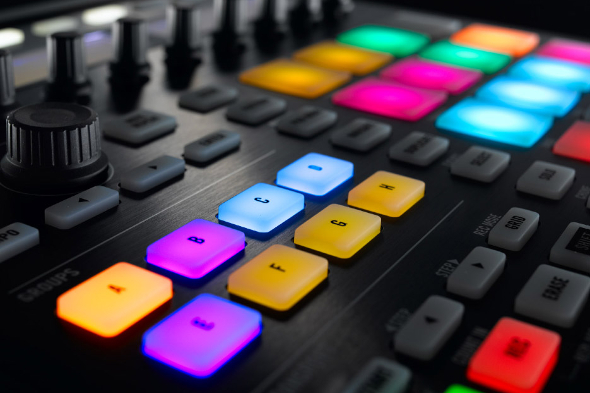 It’s barely been four years since Native Instruments first introduced the Maschine, which provided a then unique combination of hardware beatbox and integrated software solution. Since then Native Instruments have had to contend with other manufacturers getting in on the act, responding by developing a more demure Maschine Mikro version and an improved Maschine Mk 2, which featured better user feedback, time stretching capabilities and multi-coloured backlit pads.

With Akai ’s MPC Renaissance causing a stir a year or two ago and Ableton’s Push hardware being revealed to huge applause in the run up to last summer, it was perhaps inevitable that Native Instruments would eventually offer a more expansive take on the Maschine hardware, and this time they have decided to ditch the downsizing angle and go for a larger, more all-encompassing unit, seeking to further improve user visual feedback and offer an altogether more complete music production solution. 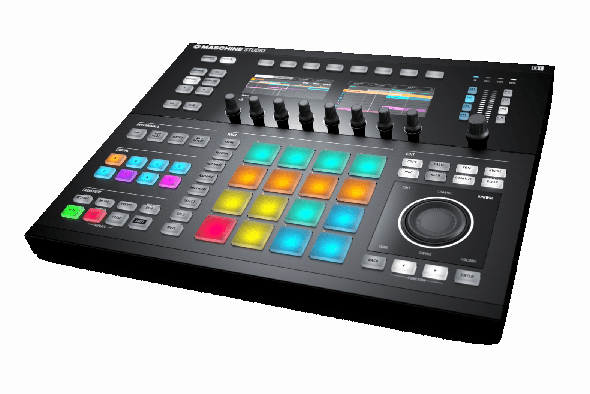 Attention, as always, tends to fall on the hardware part of the system, and with the new Maschine Studio controller we are treated to a larger unit than its predecessors, allowing enough room for the addition of a well proportioned jog wheel with cursors for the purpose of aiding navigation without the need for constantly reaching for the mouse. Also improved is the addition of a level meter and volume control knob, with quick access to the level of various sounds, groups or the master track. This will be a welcome addition to many Maschine users that felt that the lack of a meter was a serious oversight in the last update, and shows evidence that Native Instruments are keen to listen to user feedback.

Perhaps the most conspicuous upgrade is the improved pair of colour screens that help give visual feedback on wave forms whilst editing patterns, scenes and arrangements. Underscored by eight endless rotary knobs and topped off with eight backlit buttons, the dual screens also make browsing the Maschine library and controlling plug-in parameters a breeze, even if some of the buttons don’t exactly line up directly with their functions on the screen. As well as direct access to mix, scene and pattern modes and the master section with level metering, there are also some nice details such as recording options that can be accessed by holding down the record button, allowing you to change quantize, metronome, pattern length and grid settings before diving in to a session. 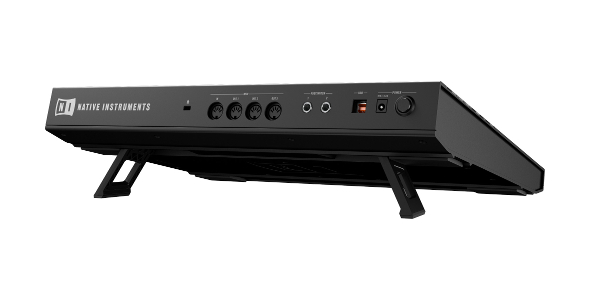 For the most part, Maschine users will be pleased that Native Instruments haven’t tinkered with too much, and anyone familiar with the older units will have no trouble getting to grips with this new model. The sixteen backlit pads are present and correct as well as the simple transport controls and group buttons, with the addition of a step sequence mode that is reminiscent of the old sequencers found on drum machines such as the TR808, though it should be noted that the pads replicate the steps right to left, bottom to top, where top to bottom might have been a more logical configuration. Despite this small niggle, the hardware is ideally suited to those that want to get their eyes away from their computer screens, and with a fold-away stand that puts the unit on a comfortable slant, the latest controller in the Maschine arsenal is well designed for purpose.

However, a controller is only as good as the software it controls, and users of the Maschine software have enjoyed free upgrades up until now. Even though an upgrade to Maschine 2.0 will cost previous Maschine owners more money, the software has gone through some major changes. In fact, we are told that the entire audio engine has been rewritten from the ground up to allow for a much more efficient use of the CPU, and therefore a better user experience. There are also less obvious hardware improvements in the form of multiple MIDI outputs on the hardware, which come with improvements in the MIDI implementation in the software, including the ability to import MIDI files, automation outside of macro-control, plug-in programme changes, and the possibility of creating custom macro control sets, ideal for live shows. 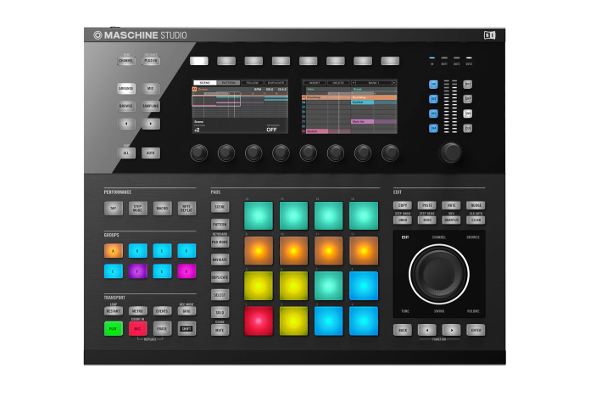 Another new feature of the software is the mix view, which acts as a portal to your plug in strips and mixer, making the finalizing of finished work a more realistic possibility than it was previously. There is now a cue bus that can be assigned to any output on your audio interface, making it possible to send a metronome to a drummer for a much more inclusive live experience, or for cueing samples and preparing clips in a laptop set. Perhaps the biggest new feature is the new drum synthesizer, which allows you to create your own drum sounds from scratch, including huge subby kicks, snapping 8-bit snares and house claps, to authentic acoustic airy toms with percussion. Add to this full versions of the Massive, Reaktor Prism, Scarbee Mark I synths and keyboard sounds, Solid Bus Comp effects and 23 sound effects plug-ins, and you have an impressive set of tools straight out of the box.

Maschine Studio is in direct competition with the Ableton Push controller, and in a lot of ways the older Maschine systems have had to go a long way to compete with one of the most popular DAWs on the market in Ableton Live 9. Both Push and Maschine Studio are well integrated with their software packages, and if you like the Maschine hardware but aren’t as keen on the software then there are mappings out there that will allow you to get control of Ableton via your Maschine Studio hardware. Overall, Maschine Studio doesn’t seem overcrowded. Native Instruments haven’t panicked and thrown more pads than is needed, and instead of going head to head with Ableton’s innovative scale and pad keyboard system, they have the added benefit of MIDI I/O not found on the Push, making the addition of a traditional MIDI keyboard an easy option.

Although there is no sound card on this new unit, and it still requires a power adapter to operate, the bonus of having clear visual feedback from two large screens, less dual function buttons to learn, and a host of improvements in the software and extended sound library makes a compelling case for further investigation of the Maschine Studio.