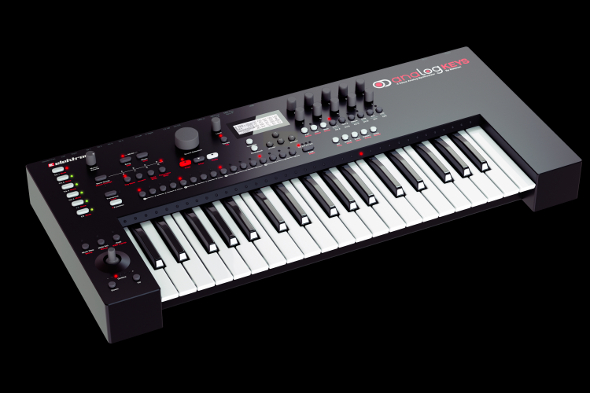 Released last year, Elektron’s Analog Four took the distinctive design and form of the company’s Machinedrum and Octatrak devices and combined it with a four-voice analogue synthesiser, sequencer and effects. Now Elektron have revealed the Analog Keys, a device which uses the same architecture as the Analog Four, but with the addition of a 37-note keyboard, joystick with the ability to control 15 parameters, updated step sequencer and extra controls.

Like the Analog Four, the Analog Keys will feature two analog oscillators, two sub oscillators, dual analog filters and an analog overdrive circuit per voice. Excitingly, the Analog Keys will be also be polyphonic, though the device is flexible enough to use as four separate monophonic synthesizers, and in a four note unison mode. Owners of the older Analog Four however will be pleased to hear that polyphony will added to that via the next firmware update. Full specs for the unit can be found at the Elektron website, while the unit’s capabilities can be previewed in the video below.