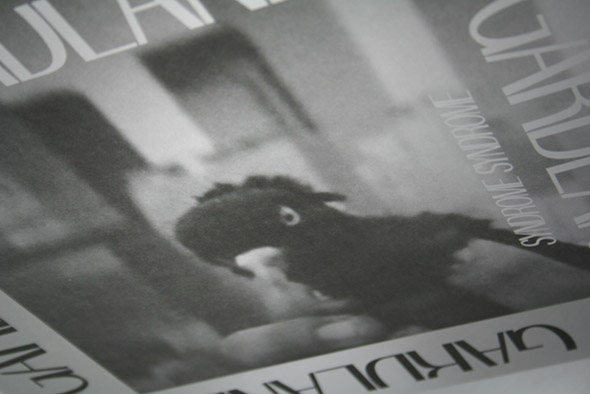 As a duo making improvised “one-take” techno jams on a variety of analogue hardware, Australian act Gardland fit one of 2013’s key narratives perhaps a little too snugly; given the prevalence of this kind of material of late, it’s little wonder the words “raw analogue techno jams” have started to fatigue fans and journalists alike. Of course it’s not a given that this kind of music should be inherently unimaginative, just that it lends itself to being thrown together in a haphazard manner. The origins of the Gardland project, supposedly borne out of a ten day drug-fuelled psychedelic bender in the Australian outback, is not exactly the kind of story that inspires much confidence in the quality of their sound.

Although the more cynical may find it easy to give Gardland’s debut a miss based on these reasons, Syndrome Syndrome is in fact one of the most interesting and listenable albums to emerge from a genre of music that is becoming increasingly characterised by muddy mixdowns and an over-reliance on rough, industrial textures. Gardland’s productions fit somewhere between the dystopian house and techno of Svengalisghost, and the emotive, futuristic approach of Stellar OM Source, both of which have shone through as some of the best artists this year making this kind of material. Most importantly, like these artists, Gardland have their own distinct aesthetic that imbues their music with the character necessary to elevate it above an increasing number of like-minded producers.

Gardland’s music is undoubtedly not quite as colourful as those previously mentioned, but it’s far from monochrome. Intro track “Grrone” sets the scene with a combination of barbed wire static and razor pads that blend into a sea of swampy brass, which each individual element sounding clearly defined. The title track, meanwhile, threads a percolating rhythm accented with loose snares through its softly quavering mechanical moans, while on “One In None”, taut, guttural saw waves are tied up to revving noises that sound like they’re coming from comically anthropomorphic vehicles. Although it’s undoubtedly music from made from machines, everything is imbued with an organically heat-warped sepia hue, seemingly crisped up by a background sea of incandescent radiation. Their music is always busy, but strangely devoid of life at the same time, as if their machines were left to their own devices while their operators’ desiccated corpses lay slumped over them in some forgotten nuclear bunker.

It’s this strange sense of half-life (‘undeath’ might be a more apt description) that makes Syndrome Syndrome such an interesting album. Rather than overt Detroit-inspired futurism or noise-tinged shades of black, Gardland have created their own kind of techno language, one as sandblasted as that of Andy Stott but with just enough energy to stop you become entombed in their sound; “Ride Wid Me” may have echoes of dub techno, but is regularly blasted with the electrical energy you could imagine was designed to reanimate corpses, while the rubbery bassline and cavernous melody of “Magicville” don’t so much as thump as they do slither uncomfortably. Even closing tracks “Nothing But Not Zero” and “Hell Flur” – two of the most sombre, funereal tracks due to their desolate pads – are kept vivid with the former’s bubbling toms and the latter’s ominously rumbling bass. It’s obvious that Gardland are still mastering their machines, but to have such a distinct signature so early on bodes well for their longevity.