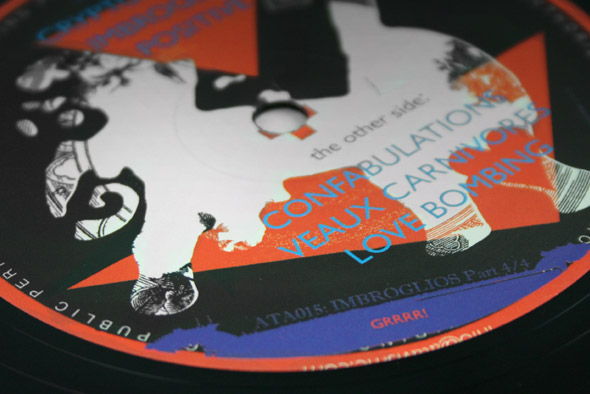 It’s fair to say that Pépé Bradock’s Imbroglios series has received a mixed reaction from critics. Ever since the first 12” dropped last year, reviewers have been at loggerheads over the series’ quality; some believe it is amongst his best work (no mean feat, given his track record of consistently producing tracks that mangle house music, and electronic music generally, into warped new forms), while others have criticized it for being puzzling, maudlin and just plain duff. It’s true that the various tracks on the first three Imbroglios releases have been challenging, unsettling and, at times, just plain odd. But then this is Bradock we’re talking about, a producer who once created an entire house track out of the sounds of people being tortured (“Rhapsody in Pain”); you should expect this kind of dark, blood red horror-tronica. This is what he does; he would no doubt be more commercially successful if he knocked out tracks as sensual and beautiful as “Deep Burnt” once or twice a year, but that’s not what he inspires him. Criticizing him for making challenging records is way off the mark.

There’s also been much confusion about what the Imbroglios series actually is. On the labels, it explains that the music is taken from the soundtrack to a film called Operation Veaux Carnivores; such a film seems not to exist (at least not with that title, according to the Internet Movie Database and an afternoon spent trawling search results on Google). So, it’s the soundtrack to a film that probably only exists in Bradock’s mind. Given the depth of imagination in his music ­– not to mention his knack of evoking dark and disturbing images through the use of odd samples, murky textures and hallucinatory rhythms – it would make fascinating viewing.

In some ways, it doesn’t matter whether the film is real or not. It has given him a framework to further explore the dark recesses of his mind, and his love of soundtracks, free from the demands of those who believe he should stick to making quirky, off-kilter house music. This fourth and final installment is predictably as challenging as parts one to three. Across the six tracks, Bradock explores a variety of clandestine moods and tempos, employing his trademark production techniques – choppy percussive cut-ups, fuzzy electronics, strange samples and surprise changes of style and pace – to dizzying effect. It’s the sort of collection that requires repeat listens before it makes any kind of sense, but ultimately it’s worth the effort. The multiple layers demand attention, otherwise it just sounds like a dense, ghoulish wall of noise.

It is, though, something of a low-key triumph. “Confabulations” offers a startling opening, the pounding opening rhythms offset by cut-up organs, looped sound effects, sludgy electronics and the kind of skittish, stuttering stabs with which he’s built his reputation. Whenever you think it’s just about to get going, it morphs into something else. The same could arguably be said about “Veaux Carnivores”, a kind of grandiose exercise in chilling horror-tronica that flits between moments of near ambient solitude, soundtrack style soaring electronics and everything-but-the-kitchen sink intensity. Synths bubble, rhythms rise and fall, and discordant, distorted hits appear and disappear in the blink of an eye. If you wanted a last hurrah while civilization was crumbling to dust, you’d whack it on the stereo and dance like you meant it. “Love Bombing”, which closes out the A-side, offers a glimpse of Bradock’s rarely seen softer side. Woozy, subdued and low-key, it’s like yearning electronic jazz created on an MPC. Emotionally, it seems to sit somewhere between wide-eyed, rush inducing positive and teary-eyed melancholy. It, too, stops and starts with an all too familiar regularity, but somehow that enhances the listening experience.

Things get even more dystopian on the flipside. “Cryptomnesias” initially rolls along on a surprisingly funky wave of electronic jazz cut-ups, but soon we’re back to the intoxicating, delay-laden ambience, all swirling atmospherics, pianos being tuned up and distant voices. Bizarrely, it then changes for a third time, moving into a sped-up barrage of tropical rhythms put through the mangler, spooky ambience and deathly tones. “Imbroglios” itself is, at least, relatively straightforward by Bradock standards. Simultaneously warm, distant, melancholic and intoxicating, it builds the action around a shuffling rhythm, tear-jerking chords, clanking percussion hits and, most pleasingly of all, the sort of deliciously evocative melody that’s largely lacking elsewhere. It’s the EP’s most memorable moment by some distance, and the track that will be returned to most frequently.

That just leaves closer “Positive”, an exercise in pushing electronic cut-ups – curious synths, booming stabs, weird melodies and jumbled voices – to their very limit. From a pure production point of view it’s stunning. It’s a little hard work for the listener, but there are still ear-catching melodies hidden amongst the rubbery, rhythmic stabs and off-key sounds. In a way, it sums up everything that makes Imbroglios 4/4 so fascinating and, for the most part, impressive. It’s discordant and far from straightforward, but Bradock teases beauty from the chaos.

A1. Confabulations
A2. Veaux Carnivores
A3. Love Bombing
B1. Cryptomnesias
B2. Imbroglios
B3. Positive