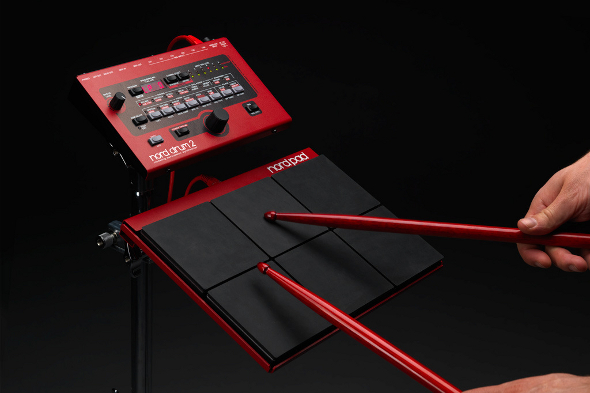 Rob Lee finds out how the Swedish synthesizer designers Nord have improved on their original Nord Drum unit.

It wasn’t that long ago that Nord released their Simmons-inspired virtual analogue drum synthesizer, the Nord Drum. Although these days the Swedish brand is best known for its lead synths and stage pianos, it has its origins in the world of drum and percussion triggers, having developed the industry standard Ddrum triggers in their early days. The original Nord Drum used three partial sources to create drum sounds, and by mixing the tone, noise and click elements and manipulating them via filters, velocity and pitch, a lot of variety could be teased out. The Nord Drum’s interface was equally simple with a single knob and a team of satisfyingly high-end Nord buttons to help navigate and edit the sounds, including a simple numerical display to give a visual representation of the currently chosen parameter. There were four trigger inputs for integration with any kind of trigger system you cared to choose as well as MIDI I/O. However, it only featured a single mono 1/4” TRS output and there was no separate headphone output. Despite some outward limitations, there was plenty of scope for MIDI integration with control over the editing of MIDI channels as well as MIDI notes (no MIDI CC though) and the trigger control was enhanced by handy input thresholds and sensitivity – in other words, good, but not without its flaws.

Nord have listened to the feedback they received and revisited their design with the all new Nord Drum 2. At first glance the new machine doesn’t look much different to the old unit, wisely opting to keep its demure size and weight, durable chassis and simple layout. The new machine now features six channels of trigger inputs with stereo 1/4” TRS outputs and a 3.5mm headphone port; The MIDI I/O is intact, with the promise that the unit will transmit MIDI CC in a software update, and allow you to convert triggers into MIDI (Nord have included the possibility of upgrading the unit’s operating system using transmission over the MIDI I/O), while it’s also possible to save performance programs for later recall, this time using SysEx over the MIDI protocol. 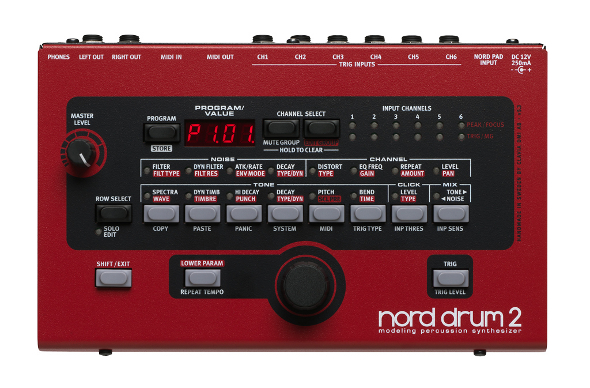 It’s the synthesis department that features most of the upgraded features. There is a redesigned noise section that includes a filter envelope with resonance and decay. A lot of the parameter changes are still accessed by holding down buttons whilst turning the knob (though thankfully not ones that would make quick performance tweaks difficult). There is a new channel section that allows you to add distortion, EQ, repeat (a kind of delay effect), channel level and pan. All of these parameters work independently between channels so if you wanted to add crushing distortion to your tom sounds whilst having clean kick and hi-hats but a delay on your snare sound, then the Nord Drum 2 will happily oblige. The only parameter that unfortunately doesn’t allow you to have complete independence here is the repeat tempo.

With the development of their new drum synth, Nord have designed a set of pads that connect with the drum synth via an Ethernet connection. The pads themselves are small but practical, taking up marginally more space than the synthesizer itself but remaining firmly in the portable category. Both the synthesizer and the pads ship with an adapter that allows them to be mounted on drum stands or clamps. One of the common complaints by drummers using acoustic kits is the problem of cross triggering or vibrations from the acoustic drums setting off triggers accidentally; thankfully the drum synth has plenty of control over the threshold and sensitivity in which the triggers operate, making them ideal for all kinds of environments including integration into extremely loud live situations. If you are using the Nord Drum 2 as a stand alone unit, away from an acoustic drum kit, you can use the Nord Pad in conjunction with a separate kick trigger connected to trigger input one, though it should be noted that connecting the Nord Pad does disconnect the direct trigger inputs on the synthesizer unit, except trigger input one. 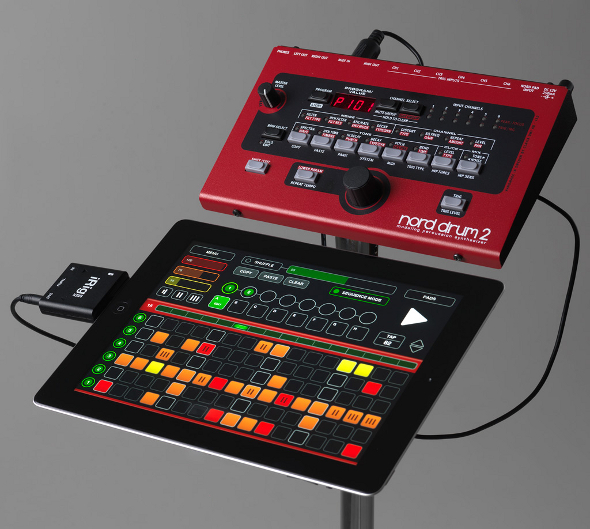 Nord have kept away from turning their modelling drum synth into a sampling drum synthesizer, and for the most part this keeps the Nord Drum 2 at arm’s length from sampling groove production units such as Akai’s MPC range as they have always intended for the Nord Drum to be a tool for live drummers to integrate electronic drums into their acoustic set-up, rather like how the early users of Simmons drum synths worked in the late ‘70s and early ‘80s. However, there is the possibility of exploring the Nord Drum 2 further using a step sequencer in the form of an iPad app called the Nord Beat 2, which when connected to the Nord Drum 2 turns the iPad into six channel/sixteen step MIDI sequencer app with pad mode allowing direct control over the Nord Drum 2 (or any other drum machine for that matter) using the iPad’s touchscreen. The software also includes flexible MIDI output routing, tap tempo, individual track muting and MIDI clock sync options, which leaves your hands tantalizingly free to filter and tweak your creations out of recognition using the Nord Drum 2’s extensive editable parameters.

Despite its electronic circuitry, the Nord Drum 2 retains its bespoke organic character, which is a credit to its simple three part synthesis – expect to hear booming log drums and 808-type kick sounds next to snappy hats and snares with the possibilities opened up by combining tuned gong tones with mechanical FX. In fact the only thing that seems lacking from the Nord Drum 2 is the inclusion of separate outputs for each trigger/channel. However, the stereo outs and pan control are a huge step forward and coupled with the tank-like build of the unit and pads, there is little to put off any drummers or percussionists. Only Roland’s SPD-SX  and Alesis’ Samplepad drum machine come close, but both lack the character and hands on control of the Nord Drum 2. Add the light weight design and compact dimensions and you have a powerful drum synth that combines real character in a professionally built unit that is also a lot of fun to use.