Rich Oddie – Against Your Will 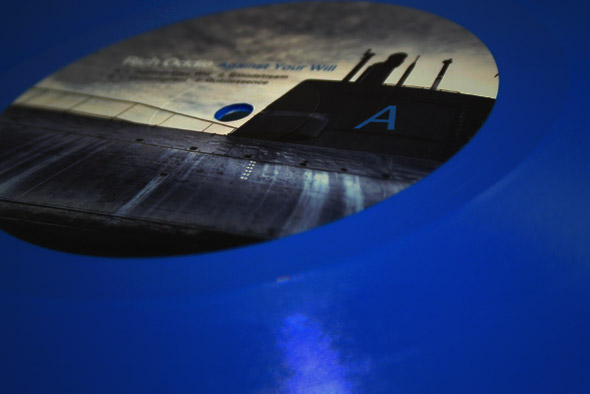 There’s that scene in The Hunt For The Red October where the camera zooms in toward the Russian speaking mouth of Ivan Putin, an ill fated political officer on a rogue submarine captained by Sean Connery’s Marko Ramius. Putin speaks in his native tongue until reaching the word ‘Armageddon’, pronounced the same in English as in Russian, and this signals the chance for director John McTiernan to pull off one of the most memorable moves in ‘90s Hollywood cinema. From here on all Soviet dialogue is in English (only towards the end of the film once Russian and American submariners meet are subtitles used again) and Sean Connery’s velvet drawl is not only forgiven, it’s forgotten.

It would be churlish to say that Rich Oddie’s Against Your Will EP for Surface LTD – the label he helped Nick Dunton relaunch in 2011 – is apocalyptic, but pulling the arctic blue record, which I was yet to hear, from its plastic sheath, was in a way reminiscent to that scene. Adorned with the picture of a sea-stained U-boat, glacial cliff faces and accommodating text, I could foresee what I was about to hear, but comprehending what it actually sounded like, and meant, was only fully translated when the needle hit the record.

Armageddon? Not quite, but the blipping sonar pulses of “Against Your Will” set the scene. Further in, those pings become submerged behind the whiplash crackle of white noise impersonating snares and textural ambience to match an exterior, underwater shot of a Soviet vessel lurking behind enemy lines. To be expected, little warmth inhibits the EP, however hot fissions of Drexciyan electro and hyperbaric low end pressurise a pumping “Bloodstream”.

“Undercurrent” opens the ice floe bedecked B-side with sparsely programmed beats that become all the more confusing with the bombardment of gurgling synth lines, rattling metallics and splashes of acid. It’s not until the entrance of an off beat snare does the track harbor any traceable groove. It’s these types of convoluted arrangements that make much of Mike Parker’s music all the more evolving, so it’s no surprise in the opening passages of “Quintessence” that similar sub-aqueous tones to Parker’s “Below Zero” can be heard – a track which underwent a 2013 re-master for the debut and subsequent single release from the Mariana Wax set up by late Dave Twomey.

Inspired by the deepest part of our great blue, Mariana Wax 000 features samples from a 1960s interview of French marine explorer Jacques Picard explaining the blustery conditions of his self propelled expedition to the bottom of the sea. So as dubby sounds surface for shimmering rays of Detroit synths in “Quintessence” – bouncing off a what sounds like the regimented drum pattern of a delay-effected “Mercy” by Boddika & Joy O – both EPs share a similar thematic; creating a release for Surface LTD where the deep sea adventures of Marko Ramius, Jacques Picard and Rich Oddie have never at the one time been so relevant.

A1. Against Your Will
A2. Bloodstream
B1. Undercurrent
B2. Quintessence