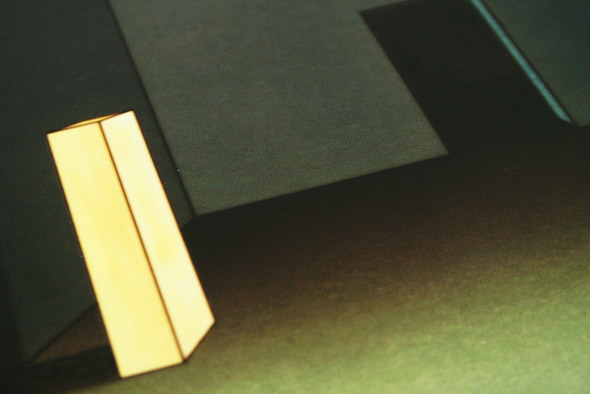 A fascination with imagined landscapes seems to have been evident in the work of Daniel Lopatin since the beginning or his career – and probably since before then. Betrayed In The Octagon, his debut as Oneohtrix Point Never, seemed to create towering crystalline structures out of its drifting arpeggios and indistinct chords, placed within an landscape that seemed to exist within a vast alien dimension filled with violet skies (something perhaps best represented on the cover of the Rifts LP which collected its tracks). In 2010’s Returnal, this space became more turbulent, rocked by rougher textures. 2011’s Replica took a different approach entirely; taking samples from 1980s commercials and forming them into a unique musical language. It was an occasionally claustrophobic album inverting his usual space into something much more concentrated. Rather than a panoramic listening experience Replica was introspective, seemingly designed to muddle the brain and force the listener inside their own imagined space rather than one of Lopatin’s design.

Lopatin seemingly lies somewhere between these two modes on new LP R Plus Seven. The record’s cover, depicting a stylised bare room, suggests a domesticity miles away from his previously imagined extraterrestrial vistas, but the stark geometric lines of the door, window and freestanding obelisk (which could equally be a wardrobe) mark the setting out as profoundly domestic. It’s an appropriate visual cue for R Plus Seven; like the cover to James Ferraro’s Far Side Virtual, which reflected its retro hyper-reality in its dated Windows 95-inspired design, the art of R Plus Seven reflects the oblique mundanity of the album, which although complex in its own way, feels like the most accessible thing Lopatin has produced.

This isn’t to say R Plus Seven is mundane – far from it – but rather than taking you to far flung dimensions, it’s an album grounded in the tradition of American composers like Steve Reich, Philip Glass and Terry Riley. Like Replica before it, R Plus Seven is an album that reflects 20th century US culture, only through snatches of familiar musical form rather than the detritus of capitalism. In its swelling organ chord and subsequent arpeggio, opener “Boring Angel” could almost be soundtracking the build-up to the pitch at a baseball game, only one rendered in vivid, synthetic detail. “Americans” is practically a symphony of modern American instrumental music packed into five minutes; minimalist marimbas collide with synthetic muzak strings, and choral pads give way to pulsating synths and half-remembered snatches of vaguely familiar voices before the motifs return for a final crescendo. If Brian Eno made Music For Airports, then R Plus Seven feels like music for conceptual ’60 American living rooms.

The fractured vocals of “He She” and “Inside World” both feel like listening to an overheard conversation from outside an open window; the listener’s own experience occasionally disrupted by snatches of music drifting in from an adjoining room as the dial is turned on a radio. If this is an isolated experience, it’s at least a strangely comforting one. It’s the same with “Zebra” – easily the album’s centrepiece – where a shattered melody strikes like lightning and is just as quickly washed away by an eerie calm rolling in like a supernatural fog. Just when the prevailing mood seems to be that of a John Carpenter film, the distant chimes and fractured saxophone replaces it with something snugly reminiscent of Vince Guaraldi’s music for the Peanuts cartoons.

It’s this swing between deep unease and the return to familiarity that makes R Plus Seven such an interesting entry into Lopatin’s canon. Never before has he so explicitly tried to make the listener so explicitly at ease; on “Cryo” he combines a meditative backdrop of distant bass tones which seem to sound like a looped portion of an ‘80s R&B track echoing through a wormhole into the past, and on “Still Life” he balances its darker elements with cushions of elegiac melody.

R Plus Seven won’t be everyone’s favourite Oneohtrix Point Never album for precisely this reason; it wears its heart on its sleeve, veering dangerously close to schmaltz in a way that some, who yearn for his earlier direction may find uncomfortable. Closing track “Chrome Country” is a case in point; its angelic chorus, softly trailing piano lines and marshmallow synths build up to the kind of organ climax you’d expect of a particularly overwrought ‘90s movie’s closing montage. But it’s a moment that encapsulates what R Plus Seven seems to be about; ordinary moments brought to life unexpectedly, by the simplest of musical pleasures.