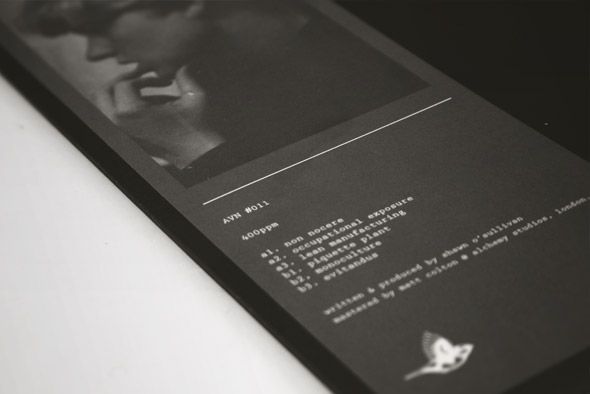 The appearance of New York-based Shawn O’Sullivan on Shifted and Ventress’ Avian, marks something of a milestone for the label, being as it is the first time the label has looked to North America for a release. In many ways this isn’t wholly surprising; although US artists Function and Silent Servant (along with the UK’s Regis), and New York industrial techno pioneer Adam-X paved way for the stark, functional techno of the variety Avian have curated over the past years, and Developer has been flying the flag for that sound on the West Coast, the label seem predominantly about pushing newer artists, of which the US has comparatively fewer emerging in this particular niche than Europe.

O’Sullivan is however one such producer; as one member of Led Er Est, he has experimented with a new wave-inspired sound, as Vapauteen on L.I.E.S. he has pushed heavy industrial textures, while this year’s Civil Duty EP (featuring Nation artist Beau Wanzer on one track) saw him deliver a sleek, rounded kind of techno. The Non Nocere EP under the new 400PPM moniker largely fits in with the latter, and is perhaps his most confidently refined incarnation to date. In keeping with Avian’s more experimental leanings, the EP is bookended with abstract, beatless experimental pieces. Both “Non Nocere” and “Evitandus” flutter with a barely subdued analogue rage, yet there’s light in both; the former contrasts deep, sonorous tones with a noise that threatens to engulf the dynamic range, while the screaming sound of the latter seems to come from a glossily rendered digital Hades.

However, it’s the four techno tracks where O’Sullivan really flourishes. In a climate which is increasingly dominated by savage distortion, O’Sullivan’s firm yet clean approach – which seems to combine the best aspects of Traversable Wormhole’s dark functionalism, Marcel Dettmann’s knack for clean sound design and an underlying organic element – is a breath of fresh air. “Occupational Exposure” clatters with the sound of industry, but never feels tethered to it; the smooth, pulsing bass acts as a neat counterpoint to the rough percussion and clanging sewage pipe melody. This is industrial techno of a sort, but one which literally seems to reference the movements of the factory rather than just the industrial genre; the regular rhythmic pulse and distant hydraulic motions of both “Lean Manufacturing” and “Piquette Plant” seem just as inspired by stark, fluorescent-lit production lines as dark warehouse spaces, but always with the sense there’s a human at the controls.

“Monoculture” is perhaps the EP’s most successful moment. Stepping outside of the 4/4 comfort zone, its offbeat kick pattern is joined by a dubby spaciousness set apart from the relentless strobe of its counterparts; rather than being constructed from glistening metal plates, “Monoculture” takes an organic form and augments it with a mechanical exoskeleton. The music of 400PPM is undoubtedly functional, but at its core there is a tangible muscle mass holding everything together.

A1. Non Nocere
A2. Occupational Exposure
A3. Lean Manufacturing
B1. Piquette Plant
B2. Monoculture
B3. Evitandus