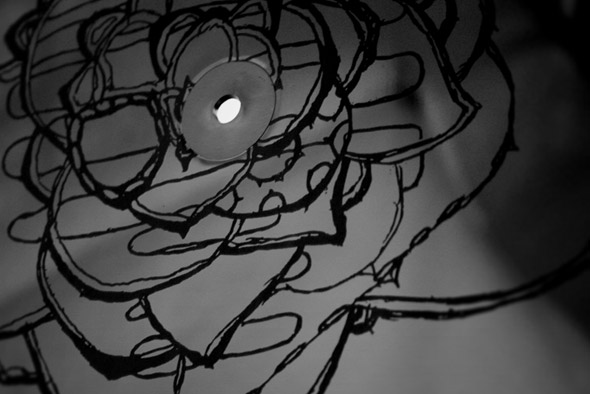 The one-sided vinyl release certainly makes a statement. One that can sometimes come across as a little indulgent, but if done correctly, provides something of permanence. The New Zealand-based producer FIS anoints the new Void Coms label with Homologous, which dedicates one side to three Homologous tracks, while the flip offers a laser etching of artwork FIS designed especially for this 12”. Indulgent? Perhaps, if the music was limited to one modest track, but in the case of this EP, FIS provides three fascinating productions that encapsulate and define its given title: having the same relation, relative position, or structure.

Void Coms, and as a result Homologous, is said to be inspired by Yves Klein, a French artist known for his workings in the 1960s expression of Nouveau réalisme (New realism), with suggestions that  particular influence comes from the The Void, an exhibition where Klein painted an empty gallery space white to emphasise the subject of a large cabinet. An unspoken Klein narrative laces the EP, and subsequently Void Coms (perhaps the sound of a stubborn cupboard being shifted around a room).

A windy fluster of unsettled sound effects opens the EP with the simply titled “Homologous 1”, which sounds like the haunted muster of an empty Blair Witch’s house after she’s left to terrorise young film makers. So much as a wet pitter-patter, not a beat, offers little danceable juncture, but it does provide an enjoyably jilted and undecipherable groove. There’s also a striking resemblance to the sound design of Lucy’s Wordplay for Working Bees. Many of Lucy’s inspirations for that album came from dissonant sound theorist  Karl Heinz Stockhausen and dystopic French architect Le Corbusier, and the way the Italian embedded sampled snippets of muffled voices into his syncopated swamps of gauzy techno is equally cathartic to the radiophonic samples (maybe of Klein himself) used by FIS.

A short “Homologous Interlude” separate the two title tracks, which introduces itself with the noise Transformers make when they change form into a gun or bustling road train. It’s this static intermission that ensures Homologous is a well rounded release which should be considered more than a simple EP. Icy textures then complete the interval which plays out to the brief cameo of percussive, yet warming, tom drums.

“Homologous 2” is introduced with the sound of snapping fingers and body-slapped claps that a youngster would make dealing with the boredom of being left in an empty waiting room. Further into “Homologous 2” rolling clicks become a tumbling two-bar loop of fast drums that slow to an eventual halt like the spinning cluck of a casino’s wheel of fortune. FIS pumps pulses of sine-wave sub bass into the track – similar to some of his productions for experimental drum and bass label Samurai Horo and Exit Records – with the remainder of the EP playing out like a motor boat unsuccessfully trying to kick start itself from a boggy marsh.

The one-sided vinyl release is a bold statement, and although it’s not as gimmicky as the picture disc, it tends to be a good way to massage a producer’s ego. For FIS and Void Coms this is not the case; both parties have helped produce a record which at first glance may seem a little extravagant for a debut 12”, but the EP itself, laser etching and all, harbours enough quality and duration of music, to make Homologous a memento for the artist, label, adventurous DJ and vinyl collector.