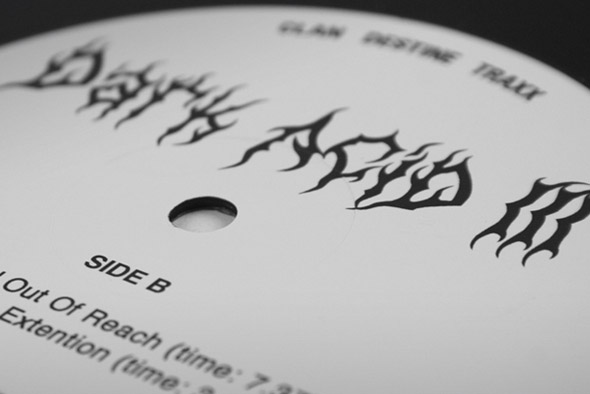 The motivation behind Clan Destine Records’ decision to veer into more explicitly electronic territory this year via their Clan Destine Traxx sub-label has never been disclosed, yet on the basis of the releases thus far there is little need for further justification. Given the calibre of the artists featured on the inaugural Dark Acid release it’s tempting to suggest the likes of L.I.E.S. and The Trilogy Tapes were in some part inspiration for this new endeavour from the steadfastly DIY Glasgow label, but as the Dark Acid series grows it’s looking more to less known – and sometimes home grown talent – with increasingly impressive results.

This third volume of Dark Acid is naturally dominated by the presence of Jamal Moss, one of the few artists this year whose prolific output across all manner of labels has not in any way stunted his distinctly creative nature. For anyone with pockets deep enough to consider themselves Moss completists, “Sexually Broken” is all the more tempting as it finds the Mathematics boss dusting off one of his lesser used aliases in IBM (or Insane Black Man to give the full title). Though deeply acidic in his own way, this track is more rhythmically regimented than Moss usually is known for though the wholly improvised way that the track rumbles forth ensures it could never be accused of rigidity.

It’s a mark of the curation of this series that “Teeth,” the following track from the rather less well known Tsu Sing feeds off the haywire energy of his celebrated predecessor and takes a turn into the darkness. Some concerted googling only brought up the merest of information on Tsu Sing, a Shanghai-based Malaysian producer who’s stated ‘pent up rage and aggression’ is transferred to his music in revelatory fashion on “Teeth”. Rampaging maniacally, it’s less proper techno and more a swarm of killer bees in attack formation, and just about stops short of going overboard on the sonic dramatics.

The release closes with TWINS and Tract, two transatlantic artists already possessing close ties with the Clan Destine label. The former is American producer Matt Weiner, currently surfing the hype machine as part of Featureless Ghost, which seem like a more accessible outlet than his TWINS material (which acronym fans will be pleased to know stands for That Which Is Not Said). The Atlanta-based musician seems to be inspired by the title series, opting for a menacing interpretation of classic Chicago acid that’s dominated by what I presume is his own vocal delivering the titular refrain in a manner akin to D’Marc Cantu. Drums jack away loosely and a bassline prowls with intent but there’s a neat switch in rhythmic emphasis at the point where some might be content to continue which ensures your attention remains to the very end.

It may be somewhat clichéd to say, but Clan Destine Trax have left the best till last with “Light In Extention” from Tract, the recently adopted alias of label regular Ela Orleans. There’s an element of shame admitting her glut of material under her given name and as part of Hassle Hounds is unknown to me, but you feel like diving right in if it’s of a similar quality to “Light In Extension”. The closest in spirit to the work of Jamal Moss, Orleans’ production here shifts nervously into gear and proceeds to fry the membranes of anyone within listening distance across its mercilessly short three and a half minutes. Perhaps we could petition Jamal Moss to edit and extend the track and relaunch his Medusa Edits series?