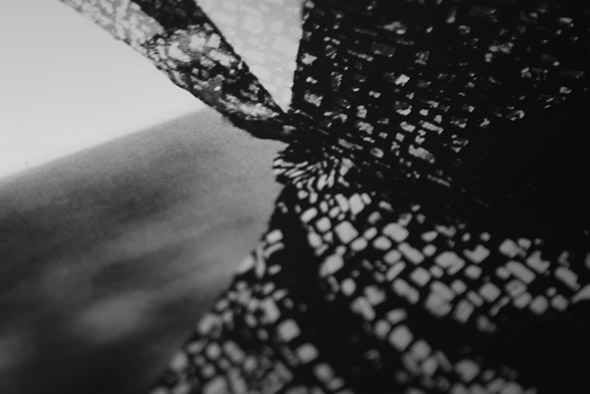 Suzy Poling’s Pod Blotz project arrives on Glasgow label Clan Destine with Glass Tears, the latest album in a long line of releases dating back to her emergence under the name back in 2002. Hailing from Detroit, Poling has been involved in quite a wide range of artistic endeavours over the years, be it installation works, photography, video and performance art, with visual work that seems to parallel and overlap with her output as Pod Blotz.

From the very start of the album, Poling introduces a sense of tension that builds with terrifying urgency. Rattling drums weave throughout nightmarish electronics of opening track “Relay” with spine-chilling wails that expose a sense of subdued agony. Continuing the theme, the aptly named “Mirrored Tundra” has a darkly paranoid sensibility; it’s a track that largely relies on percussion, the kind of drumming and tapping that recalls youthful experiments with old pots and pans. Meanwhile, harsh electronics once again unfold beneath, lashing out like sirens in shrieks of desperation. The album hits its stride with “Die and Come Alive” which is perhaps the most accessible track of the album, with an enticing melody sung by Poling’s heavily treated vocals over repetitive synths, whilst retaining the same experimental curiosity of previous tracks.

“Beings in Hollow Earth” is an enchanting cauldron of electronics that bubbles and brews along with Poling’s mesmerising vocals. It almost seems like Poling is working from an underwater laboratory, with vocals drowned in the aquatic undercurrent. Simmering electronics sit next to space ship noises, perhaps influenced by the sci-fi sounds of the BBC Radiophonic Workshop, slowly coalescing to form an entrancing blend of sea and space. Recalling early experimentation, Ruth White’s “Litanies of Satan” is brought to mind in the track’s opening moments, but Poling’s work perhaps comes across a little less evil than White’s dark chantings from 1969.

“Crests and Reflections” is a mirage-like venture, with mystical electronics that seem somehow divine. Percussion quickly breaks the peace of the track, with scraping textures that are jagged and machine driven. In the final stretch of the LP, “Black Glass Monolith” closes the album with the same intensity from which it began. It is an opulent marriage of fierce drums and driving synths, a fitting close and final offering from Suzy Poling’s stunning Pod Blotz album.

A1. Relay
A2. Mirrored Tundra
A3. Die and Come Alive
A4. Secret Door
A5. Beings In Hollow Earth
B1. Giving
B2. Future Romance From The Past
B3. Crests and Reflections
B4. Black Glass Monolith