Strategy – Return From The Stars 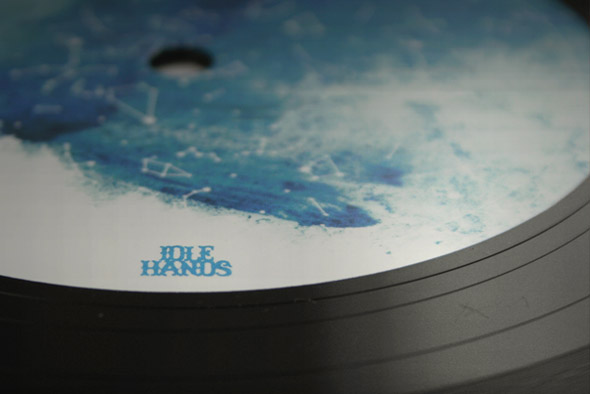 With his discography amassing a formidable body of work for one who rarely gets the recognition he deserves, Paul Dickow has tended to drift in the outer reaches of the electronic music scene rather than getting caught up in the thrust of it. In that sense it was surprising to see him pop up on 100% Silk last year when the label was in the throes of a hype machine love affair, although there is a feeling that the Boxy Music 12” may well have still slipped under the radar. Now though it’s time for another surprising appearance for Dickow as he makes the unexpected move to Bristol bastion Idle Hands.

It’s a notable move for the label as well as it makes one of its rare reaches beyond the city limits for some talent, not that Idle Hands has some limitation on non-Bristolian producers. As it happens, Dickow’s appearance on the label has roots in the convivial nature of the city through near-missed gigs and the like, but most importantly the sonic qualities in Strategy make for a neat fit on the label. Even back to the likes of “Pacific Agenda” and “World House” Dickow has always displayed an innate predilection for dub methods in his offbeat brand of 4/4 music. This isn’t a simple dusting of delay and reverb, but really wielding those devices as though it were King Tubby at the controls, and while Idle Hands may be far from a dub label, dub has always been an important factor in the music and the context to the operation.

“Return From The Stars” is classic Strategy in that sense, the pulsing feedbacks and spiraling tails starting from the first bar and only growing as the track progresses. Meanwhile the percussion comes in a broad palette from machine thuds to organic tumbles while rubbery sub bass plods away underneath, teasing out a mix-friendly intro until the equally rootsy chord stabs come skanking in. There are few who can nail loose-fit house quite like Dickow, and here he’s in his element as the ramshackle array of beats and their echoes trip into each other without ever losing a sense of groove. Meanwhile extra touches of melodica and keys lift the track to new emotional heights when you were comfortably settled into a hypnotic meditation, but it’s a canny move to avoid slipping into polite background fodder. After all, there’s plenty of time for the track to drift out on some final effects blasts as it winds down after that peak.

In reaching for a remixer, Idle Hands call on the Bristolian staple who kicked the label off some four years ago. Pev may be something of an unpredictable proposition on his own records, but his remixes (for the likes of Dubkasm, Typesun and Vessel) have always treated the source material with respect and here is no different. The sturdy 4/4 thud is replaced by a crisp garage shuffle that stays positively linear by Pev standards, while certain elements from the original drift and bubble in yet more dubwise processing. Of all the sounds he most tangibly reaches for in his sparse version, the melodica is the one that stands out, ringing out majestically over the heads down funk of the drums and the theremin quirks and wobbles.

Delay and reverb truly are the crux of this release, both in Dickow’s original and the Pev remix, and while they might be not new tricks you couldn’t wish for a stronger pair of applications of the time-honoured techniques in a modern context. It’s standard practice to use these sounds as embellishments on the production process, but it takes a mind truly bitten by the dub bug to base their creation around those alluring echoes. When it’s done with that avid authenticity, the results can be as captivating as they are here.