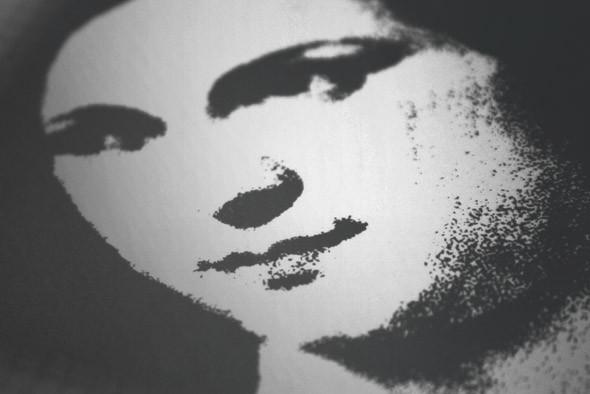 As the sound of gently lapping waves and morning birdsong gives way to a solo, bleary-eyed, delay-laden guitar – fuzzy but blissful, lo-fi but borderline Balearic – on “Domino”, the full potential of Musiccargo’s self-styled “adult kraut” sound becomes clear. While students of Neu!, Can and the like, the Dusseldorf duo’s particular take on krautrock comes with more than a healthy dollop of kosmische. This is motorik for those who prefer ambling through autumnal fields to dancing in damp, inner-city basements.

It would be fair to say that Harmonie, Musiccargo’s second full-length, is a slight departure from the droning, eyes-closed fuzziness with which they made their name. Formed in 2003, the duo of Gordon Pohl (electronics) and Gerhard Michel (guitars, vocals) first rose to prominence on the back of an impressive 2005 debut EP, Der Schmetterling, which pricked the ears of James Holden and Prins Thomas. Its’ undoubted highlight, the emotion-rich kraut-floor pulse of “Ich Geh Den Weg Mit Dir” – all droning electronics, floor-friendly beats, cascading chords and discordant guitars – hinted at greatness. Then, in 2009, came their debut album, Hand in Hand. Released on a tiny German label, Amontillado Music, the vinyl version is now nearly impossible to get hold of; currently, the occasional copies that do pop up on online stores change hands for upwards of £80. Slightly darker and more experimental than Der Schmetterling, it is widely considered a contemporary krautrock classic.

The relative paucity and high quality of Pohl and Michel’s material has earned them a cult following. Credit must go, then, to Emotional Response boss Stuart Leath for persuading them to record new material, no mean feat given that they’ve only released the occasional remix since Hand in Hand. In the grand scheme of things, a new Musiccargo album isn’t much of an event. Yet given their cultish following and their almost reclusive nature, Harmonie seems like an “event release” – at least for those who get their musical fix scrabbling around electronic music’s more leftfield margins. Proceedings open in somewhat startling fashion with “Domino”, its occasional chants, bright-eyed guitars and sparse production evokes the spirit – and, some would argue, the sound – of the beautiful but abstract guitar passages of Durutti Column man Vini Reilly. It’s easily Pohl and Michel’s most Balearic work to date.

Elsewhere, the duo focus on getting a balance between the head-fog hypnotism of classic krautrock – all droning, vintage electronics, locked-in grooves and scratchy guitars – and the wide-eyed naivety of kosmische, with more than a hint of touchy-feely ambience thrown in. It’s a beguiling, bewitching combination that makes for a magical combination. Take “Tip Top” as an example. Built around woozy, unsettling drones, bubbling electronic drums (played down in the mix to allow the other elements to take centre stage) and a nagging guitar hook, its clandestine paranoia is off-set by Michel’s occasional bursts of lazy, hazy, sun-bright guitar. The effect is mesmerizing.

The same could be said about a number of other tracks, with “Das Buch”, a tumbling, rolling fusion of skittish drums (which ping between the speakers for added unsettling effect), backwards guitars and soft focus electronics, being a particular highlight. “Adieu and Adios”, the album’s triumphant closer, follows a similar formula, whilst boasting an urgency and grandiosity largely absent elsewhere. If “Domino” is notable for its sparsity, “Adieu and Adios” is remarkably big and bold.

In between the shifting moments of intense brightness – akin to opening the curtains in a fusty Ibizan hotel room, the afternoon after a particularly hedonistic evening out – are a number of darker, mustier compositions. These are thrilling, too, and hark back to the duo’s earliest days. It’s one of these cuts, the unsettling “Sol Lucet Omnibux”, that’s arguably Harmonie’s standout moment. Seemingly doused in the voodoo spirit of drum-inspired hallucinations, its’ tribal rhythms, gothic drones, out-there guitars and pagan vocal wails seem to come from somewhere in the ether. It’s perhaps not dark enough to be inspired by the occult, but it’s certainly unsettling. Yet despite the fuzzy, droning intensity, it remains a thing of great beauty. That, in a nutshell, is the genius of Musiccargo. Even their most beautiful, shimmering moments are blessed with the aroma of intoxicating darkness.