A Made Up Sound – After Hours / What Preset 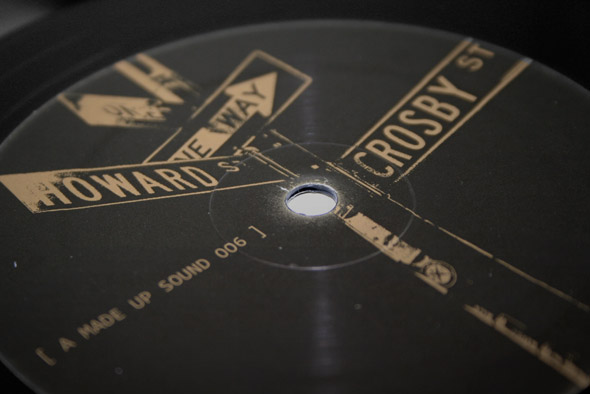 If ever there were a contemporary producer adept at throwing a curveball every time, it would be Dave Huismans. Both as A Made Up Sound and 2562, what began as ear-snagging twists on both low-slung deep house and aqueous dubstep respectively has rapidly turned into a wildly unpredictable melee of shattered rhythms that arguably give rise to the general tempo flux more than they respond to it. The stylistic differences between Huismans’ two projects have blurred in the process, leaving the listener nail-bitingly unprepared for what awaits them when a new release lands.

What has been dependable is that the self-released self-titled vinyl series as A Made Up Sound has given rise to some of Huismans’ most arresting tracks, not to mention his most ground-breaking, and the last 12” pushed this to the limit with the Pollock-does-hardcore splatter fest of “Ahead”. If there’s one quality that always shines through on his music, it’s the splayed rhythmic acrobatics, testing the human mind’s ability to keep locked on to where the groove falls, pirouetting and staggering somewhere between balletic poise and drunken luck.

So it is on this latest missive, although even such expectations are only laid to waste as “After Hours” unfurls over a plush twelve minutes. There is a definite nod to impulsively crafted analogue tweakery at work in this track, as the trickles of arpeggios and bucking delay responses attest, but around the comforting glow of old synthesis come surprising flurries of booming percussion that seem to deflect off the rhythmic locomotion of the central basslines. Things only get icier as Martin Scorcese’s After Hours gets an explicit homage through a choice section of dialogue. In many hands it would pass off as trite, but in this context of edgy, thrumming basslines and icy chord swells, a sinister edge lingers over this mid-section of the track, only to explode in outright fear as the last laugh of the actress gets trapped in a delay and nightmarish synths come creeping in to add to the drama.

The hefty run time is perhaps not utterly necessary, providing simply a platform for Huismans to spread out his cyclical elements and run them through undulations of processing, ramping up the FX here, dropping out the percussion there, and eight minutes in you have the full feel of the track. Ultimately though, and as the press release states, these tracks are semi-live, hence the ranging run time and drawn out effects sweeps. It’s a slower experience compared to the sharpened focus of Huismans older work; another swerve in the ever-meandering road he travels down.

“What Preset” feels like it starts on more steady ground, only for monolithic kick blasts to come pounding holes in the terra firma while a monstrous sub bass line ploughs the ensuing dirt away. There is a more discernible groove to latch on to, but still you would never be able to place it alongside anything else you’ve ever heard. After a bleak and crushing sound world has been building up around the walls of the track, a decisive ray of light gets beamed through in the shape of some jazzed-out chords which swirl in mid-air as their more oppressive ancestors make do with momentary blasts rather than any forthright beat. All the time though Huismans excels in feeding through enough elements to keep the ears busy and the tension palpable. After that weighty a beginning, it feels as though surely we must return to that hefty rhythm with this new melodic tangent in tow, but of course that would make things far too predictable. Instead the main motif of the brighter chords filters away into a bath of parameter-baiting sonic meltdown, the tension dissipating with it.

As with every other listening experience at the hands of this producer, the mind is left blinking incredulously at the end of the track, staggered at the new territory it has just been transported to and marvelling at where else he might be able to take us in the future. The anticipation, and the uncertainty that goes with it, is all part of the thrill of following the work of A Made Up Sound and 2562.

A. After Hours
B. What Preset