The Innerspace Halflife pair of Ike Release and Hakim Murphy lay down a live hardware set.

Hakim Murphy and Ike Release are amongst a number of current US producers (Amir Alexander, Joey Anderson, DJ Spider to name but three) whose music evokes the spirit of house and techno’s celebrated progenitors, whilst not being bound by attempts to recreate it. Close friends and noted producers in their own right, since aligning their creative processes under the Innerspace Halflife project in late 2011, Murphy and Release have evidently struck on a rich seam of material that’s appeared across a multitude of labels.

Recorded output from the Innerspace Halflife project first appeared early last year with EPs on the Machining Dreams and Episodes imprints run by Murphy and Release respectively, and the critical reception afforded to those releases opened the project up to working with an increasingly diverse array of labels. Appearing on Aroy Dee’s M>O>S Recordings was a logical step (especially given Release’s own history with the Dutch label) but Innerspace Halflife have also added Skudge White to their armoury as well as flirting with French labels Latency and Syncrophone.

Despite this impressive discography, Innerspace Halflife was created first and foremost as a means for Murphy and Release to perform live together, and it’s via this medium that the pair agreed to record a mix for Juno Plus, laying down an hour’s worth of “live arrangements of new tracks from our collab in between/layered over rather improvised drum machine & synth workouts”. Rawness is a quality that gets thrown around a lot these days when describing house music, but for Innerspace Halflife this means much more than simply the usage of hardware, it’s also the ideas and spontaneity included in the time between hitting record and stop on whatever equipment is used. The pair were kind enough to discuss the project’s inception, the methods used and their plans for the future over email.

Hello Ike and Hakim, how are things in Chicago?

Ike: Things are great! I’ve personally been laying low, working on tunes myself and enjoying the summer (which is now over). Gearing up for a return to Europe soon this November .

Hakim: I have been making tunes, traveling, and curating the label meanwhile promote upcoming releases.

Many thanks for recording this live set, would you say it’s indicative of the direction you are currently taking when performing in clubs?

H: Yes, it is indicative of our whole philosophy, we try to bring out what is coming from the heart and channel the energy into creative musical adventures.

I: Yeah the mix was pretty off-the-cuff as it always is during performances, feeling our way through flow of things as it’s happening, using a mix of loops deconstructed from our recorded material and a great deal of improv throughout. Except, of course, without the benefit of a live audience, where the input of the crowd in a way influences how we extend or quickly move through material.

Can you detail the set up used to execute it?

H: The setup changes, but for this instance there were 2 MPC 500s, a microKorg, a Machinedrum, and a Zed10FX mixer.

Have there been any particularly memorable live performances on your travels as Innerspace Halflife thus far?

H: The first one we did in Europe, Stockholm @ Under Bron was a great place to start, Manchester @ Bohemian Grove there was a nice connection with the people, and Paris @ Batofar was a great place to end. Though each time we perform there is a lasting impression on us.

I: In Manchester, we had a chance to take over the party in the way, playing live twice mixed with DJ sets from both Hakim and I in between and after. Hopefully we get an opportunity to do something like that again!

Recorded Innerspace Halflife material only began to surface last year, but how long has the project been in gestation for?

I: It wasn’t long before the first record came out, probably 6 months or less (about 2 years ago around this time). We each have some years between us producing tracks and neither of us is too controlling over what each other does. It took some time to develop a workflow in order to best facilitate each others’ strengths, but relatively not very long, I suppose.

What’s the thinking behind the name?

I: We went until the last minute to come up with a name for the project, and by that point we’d already recorded a great deal of tracks together. It wasn’t until we decided to release a record ourselves that we felt we should name the collab. Our tracks were all definitively (and rather unconsciously) tied together by a cosmic and cerebral feeling, so it made sense for us to highlight that with the name. From there it was a process of brainstorming and elimination.

In individual and collective terms you are both quite prolific, is there a specific method behind your work that helps to facilitate such output?

H: Philosophy inspires the methods use for the prolific outputs, at the moment there we write with all the musical tools available to us. Switching between programs, synths, and drum machines keeps our perspectives fresh as we experimental with technology.

I: I wouldn’t say there is a particular method every time, at this point. Generally-speaking, Hakim or I would start an idea or loop, the other would develop it further maybe on their own workstation, then we come together to record it together live. The equipment we use to accomplish this as our collaboration has progressed varies. Like Hakim said, that has become an important part of the philosophy behind the process – to use whatever we have to derive ideas from. Also, an important aspect to the project has been trusting in what each other is doing setting up all the variables that come in recording tracks live and leaving the rest up to the moment – letting go and just seeing what happens. It keeps me interested at least! 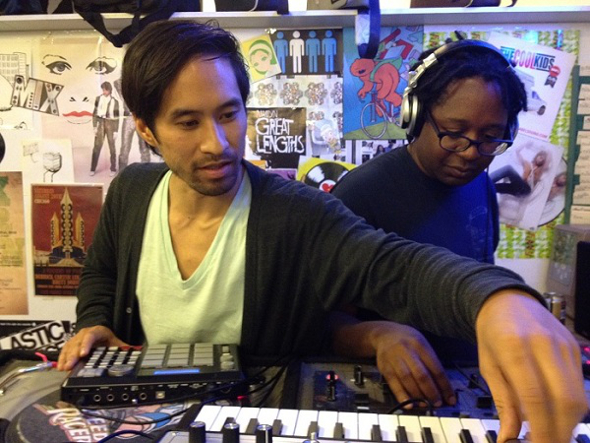 Is there a particular Innerspace Halflife release that you feel proudest of?

H: I love them all like children for what they are and let them grow, the different characters develop and we mold them into the sonic waveforms that are born to vinyl.

I: I tend to agree for the most part, but “Wind” was particularly a highlight and an achievement for me. Especially having that be one of our first releases under Innerspace Halflife. As a fan of good underground house and techno, to be involved with M>O>S (and Delsin, by extension), I feel very proud. Likewise, for our recent involvement with Skudge, I’m a fan of their work, so I’m humbled to have their respect.

From checking the Machining Dreams site, it’s clear there are links between yourselves and likes of Steve Tang, Chicago Skyway, Amir Alexander and the Plan B crew that manifests itself in the music too. Can you convey what you feel it is that links you all together?

H: We share the same philosophy about music in which we love it and produce music that comes from within. I have collaborated with all these people in different instances. Basically it is about the music and my spirit agreed with their sonic poems and we harmonized.

I: I think many of us came up within a similar scene, albeit maybe at different slightly times, different places. Maybe getting into dancing and going to parties at first, then DJing/collecting vinyl, then finally getting into production/releasing our own records. I think maybe we all have a reverence for the ‘old days’ of our scene, but not in a way that will have us actively retreading on the legacy of US house and techno. The drive to innovate and to develop our own distinctive voices on our own terms is there as well. I think that is the strongest link between us and many of our peers.

With a healthy catalogue of material behind you what does the future hold for Innerspace Halflife?

I: Release-wise, the next for Innerspace Halflife is a remix we did of Anaxander for Bloody Mary’s Dame Music label. That should be coming before the year end. We have a good deal of recorded material that we haven’t had any plans for yet. Last year, we recorded an album called Astral Traveling that we are waiting for the right time to release on Synapsis. Also, there are a few boxes sitting in Hakim’s house of an EP we put together for his label, Machining Dreams, called Orbital Manuevers.

Until the time comes, most of that material is being put to use within our live set when we tour Europe again this November and December. Individually, I’m currently working on finishing my solo album, which will likely appear early next year on M>O>S. Shouts to Steven and Marsel on that!

Where are the best spots to go record digging in Chicago?

I: Depending on what you are looking for, there are several places to go get some tunes. Gramaphone Records for all kinds of dance and electronic that still serves as a hub for the house scene in Chicago, Kevin at Kstarke has a huge selection of classic house, disco, funk, soul. Dusty Groove is world renowned for their funk, soul, rare groove, even some underground hip-hop, and rare finds. Reckless Records for is more rock and indie oriented, but there are great finds to be had there for dance/electronic heads. Those are great places to start!