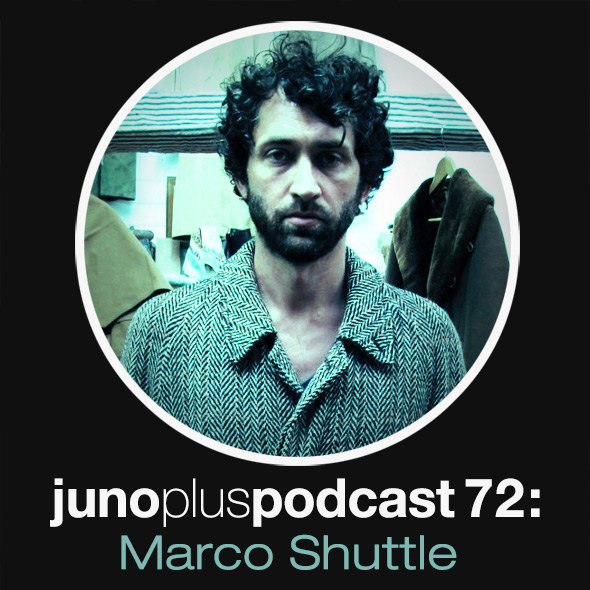 The suave Italian digs deep into his collection for ninety minutes – do not miss this one!

If there is one track that was to define Marco Shuttle, it was his 2011 hit “The Vox Attitude”. It was that EP of the same name, released on fast rolling Swedish imprint Färden, that saw the London-based Italian draw some much warranted attention to his music following the three 12”s he released after his 2007 debut. For Shuttle, however, The Vox Attitude was only the tip of the iceberg. Since then he’s made out roads from his self-described sound of ‘warehouse stompy 808–909 and vocals’ and moved into new and uncharted territory, combining bleepy science-fiction motifs with his own roughly hewn sound design. Either way, Shuttle’s production remains distinct, whether it is house, techno or the grey area in between.

Although Shuttle’s discography this year may not read like a shopping list, it’s been a prolific 12 months for Sartorelli. Admittedly it’s the sound of “The Vox Attitude” he is trying to shake, but he opened his 2013 account with a rerelease featuring remixes from Joey Anderson and Pangaea, while last month saw the release of his solo Simmetria Delle Stringhe Ep, again on his own label Eerie. Following his debut performance at Labyrinth in September, Marco Shuttle turns in a podcast for Juno Plus that not only explores his emotional, abstract and ambient tastes, but techno done right and he was also kind enough to answer some questions we sent over.

Hi Marco, how are you going?

I’m all good, thanks! A bit tired because I have been doing a lot of travelling lately for both my jobs (music and fashion), but I cannot complain…answering your questions on a plane back to London from Amsterdam, actually…so there we go!

Let’s start off by speaking about your mix. It’s quite a journey. I first wanted to ask about the first two tracks. They were classical and at times a little morbid, which set the tone for the first half of the mix. Did you have an idea in mind when beginning the podcast?

I wanted to do something deep and slightly unsettling in a kind of sinister way (as usual I would say, hehe)…so I wanted a beginning that immediately set the mood. The whole idea behind the mix is to drag the listener into a journey that from something really gentle and atmospheric organically evolves into something heavy and somehow brutal and dramatic

I always approach music and DJing in a narrative way…as if the listener was watching a movie. The first 2 tracks are almost classical orchestral…in that very epic cinematic way.

Especially when it comes to a podcast I like to do something more conceptual and adventurous to play music I listen to and I get influenced by when I make my own music. There’s so many straight dancefloor oriented podcasts out there at the moment and too many people suddenly doing blogs featuring mixes etc., really too many ( I get asked a mix about twice a month!)… so I don’t really see a point in playing club music from start to end for something like this…I find myself really not intrigued as a listener too when I see also decent tracklists but just one dimensional 4/4 house and techno…

DJ Slip’s “Everytime It Takes Awhile” seems to be a turning point of the mix. From then on in we’re hit with some very heavy techno. It’s pretty ‘90s sounding, am I right?

It is one of my all time favs indeed and definitely a “manifesto” track for my idea of techno music, no wonder I plaid it right after an unreleased (soon to be released) track by myself I feel particularly attached to…I see what you mean with sounding a bit 90’s…but for me it is just timeless techno. Once you’re locked in mixing that pounding style of techno it can be pretty hard to exit, but you navigated the mix toward something quite spacey and cosmic.

I know you’re a fan of Jeff Mills and it seems like this may have been an influence. Was this the case?

Funny enough there is no Jeff Mills tracks in this mix, but I know what you mean, and that doesn’t mean my “Mills-philia” is any less than it has always been J He is probably my biggest inspiration when it comes to techno… so yeah, when I get to the point where I can play hard I guess the influence can be heard.

How have you felt about 2013 so far? Your discography doesn’t boast a ton of releases, but it seems you really started taking strides with your productions and label Eerie, and then there was that booking at Labyrinth.

2013 has been a fantastic year, I have to say. I played at Fabric, The Bunker, The Labyrinth and had quite a few other amazing gigs, so in terms of quality it has been absolutely great. On the releases side I never tend to do more than 3 records a year. I think the kind of music I make would be overlooked if I had let’s say 6-8 records a year, it is not straight tool dancefloor music…there is a lot of work and detailing in production and editing…again it is a narrative approach like the mixes, so for me every release is special it needs its time to breath and I want people to have the time to enjoy it before a new one comes out.

How much mental preparation goes into playing a set at Labyrinth?

A lot and very little at the same time, I would say…The Labyrinth is easily the most special event I got to play at. I was feeling the pressure since I got the booking because you hear so much about it and of course you wanna do good! All the artists involved are truly amazing and it is one of the few places in the world where you can really play what you want, just “be your(musical)self”.

There is of course some practical preparation also because it’s a 3 hr set and you have to be sure of the records you bring with you (especially when you are a vinyl DJ as I am), but in the end after long nights turning around in bed thinking and rethinking what your first 10 records are gonna be, I came to the conclusion that the only thing they want from you when they book you for something like Labyrinth is just to do your thing…and try to do it as deeper as you’ve ever done, and so I did…and it worked! it actually was so smooth and easy! It loved every single moment of that incredible experience…

Let’s talk about your latest release, the Simmetria Delle Stringhe EP – or Symmetry Of Strings in English? You’ve mentioned you wanted to distance yourself from the warehouse sounds heard on The Vox Attitude EP, it seems like you achieved this?

The title “Simmetria Delle Stringhe” comes from a book I was reading when I made that track called The Elegant Universe by Brian Greene. It’s about a revolutionary explanation of the Universe based on the Theory of the Superstrings which states that all all matter – from the smallest quarks to the most gargantuan supernovas – is generated by the vibrations of microscopically tiny loops of energy (strings). I am extremely fascinated by space, science and cosmology…my DJ name was not exactly a pick, You know!

As said in previous interviews I am very grateful to The Vox Attitude and I think it is a very good record I did…I am though more pushing the abstract and deep side of my music as I feel there is where my soul feels at home..

How are things going over at Eerie?

Eerie is doing great! The label is growing and I am growing with the label. It has helped a lot defining my sound and all the releases have so far been very well received. One of the things I feel mostly rewarded about is that there are a lot of people that have almost all of the releases that came out so far. Which means that the label has already a strong sound and identity and a style that gets recognized. All the releases have been by me so far, but now I am finally starting to consider involving other new artists that are making great music and that I think would fit well with the aesthetic of the label.

What’s coming up for Marco Shuttle?

I’m working on a couple of remixes and I have already 2 releases planned for 2014. The first one is an EP for Peter Van Hoesen’s Time to Express that was “conceived”  at Labyrinth and will feature a very vocal and hypnotic techno track (that I played as last at my set at Labyrinth) and Peter’s remix of the same track on the flip side…The EP will be called Sing Like A Bird. The second planned release (Fanfara) will come out later in spring and is for an exciting newUS label project with some amazing people involved, unfortunately I can’t reveal details yet. But you will know everything very soon and you will tremble in amazement mixed with fear! Haha!