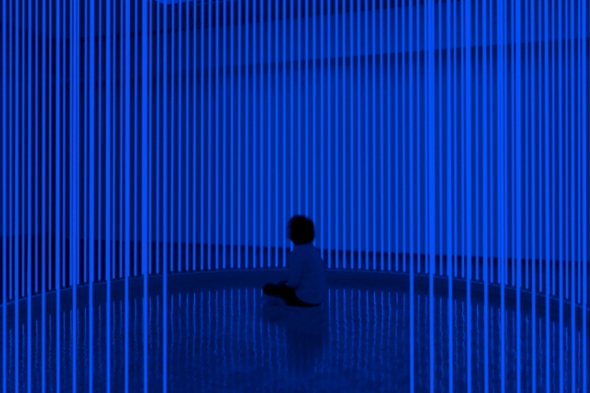 Steve Hauschildt is referred to as “perhaps the least prolific…of the three members of Cleveland trio Emeralds,” having been credited with just shy of ten releases since the band’s inception compared with, for example, Mark McGuire’s 50-odd. Now, though, Hauschildt has returned to Emeralds’ erstwhile home Editions Mego, with a double album that seems to give the lie to the idea that the artist has been on the shirk.

S/H looks back at Hauschildt’s solo career to date. Split into two discs, the first of which covers work from 2010 to 2012, and the second of which turns to the period between 2005 and 2009, S/H has the feel of a retrospective album. Kranky’s biography of Hauschildt describes him as “more of an artist than a musician”, and it’s a perception that seems to be reinforced here. Listening to the record in one sitting feels like wandering around a vast gallery full of the plastic arts, all intensely three-dimensional, even architectural.

The record is primarily about texture; about the intricacies of contrasting waveforms and the interplay between them. Saw waves sit atop billowing pads and slowly heaving basslines, forming reliefs so dramatic that it often feels as if you might be able to wander around them. The record is tactile, touchable, at times (as particularly on the shorter pieces such as “Hiccup”, recorded back in 2006) natural feeling, and at others (“Screenburn”, “Liberty” parts I, II, and III, all of which are part of his later work) fundamentally man-made.

There is also much of the digital here. Both “Dream in Dial-up” and “Flatbed Scanner” sound exactly as their names would suggest, the first gradually cascading out of itself in a gush of digital staccato, and the second consisting of slow, glistening swoops exactly as one imagines the sound of the filament crossing the glass on a scanner would sound – or, in fact, as the effects on Halflife actually do sound. “Flatbed Scanner” comes in the middle of the first disc but would be just as at home on the second, which is less focused on melody and instead more interested in luxuriating in the sounds of instruments.

Many of the pieces here sound like Hauschildt experimenting for his own amusement. They feel like sketches or, as on the utterly beautiful “Backwards Glance”, exhaustive explorations of a single figure. This is partly what gives the record its exhibition-like quality: a sense that you are being exposed to a series of self-contained objects linked more by approach than by theme. S/H is certainly not, however, haphazard. Hauschildt has a clear aesthetic, and he sticks to it. Everything here has a similar hue: a sparkling purple, glistening with the odd jagged edge. It is the same deep neon that characterises the Drive soundtrack, from which “Enter Return”, perhaps the most ‘band-like’ track from the record, could easily have been lifted.

At 37 tracks S/H is imposingly large, but it seldom feels bloated. There are moments of quite imposing beauty here, scattered frequently amongst the oddly satisfying sketches. An impressive testament to a quietly impressive solo career so far.