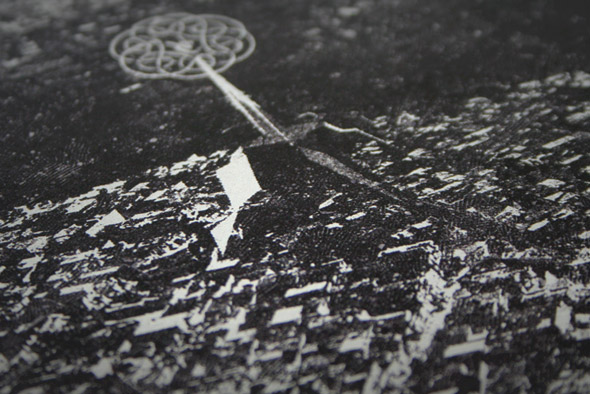 After 2011’s Room(s) cemented his shift away from the hip-hop tempo beat trickery of old, Travis Stewart’s Machinedrum project has enjoyed renewed creative vigour and engagement with the more readily active parts of the electronic music landscape. Launching the JETS project with Jimmy Edgar has been the most recent manifestation of that, whilst elsewhere singles have popped up on LuckyMe and Astrophonica amongst others. Now, following the likes of Falty DL, Stewart makes the move from Planet Mu to Ninja Tune to deliver his latest album, continuing the thread of narrative from where Room(s) left off.

If Room(s) felt like an effervescent statement of all the new ideas and possibilities that struck a chord with Stewart at the time of writing, Vapor City is the sound of him bringing that excitement into focus to create a more lucid statement. Ostensibly a concept of sorts hovers over the album, relating to an imagined city in which the music resides, although fortunately this theme lingers in the background rather than forcing itself all over the run time. Instead the album hangs together with the same ethereal thread that ran through Room(s), all lingering, reverb-drenched chord pulses and forlorn melodic content.

“Gunshotta” kicks this mood off perfectly, a deft concoction of jungle breaks applied with a delicate touch so as to complement the mournful R&B vocal licks and emotive chords. That’s not to say the music stays light as a feather throughout, as the titular ragga vocal comes cutting through the mist to signal a ramp up in the snaking breaks that power the track.

Where “Gunshotta” is all Burial-hued malaise, “Infinite Us” looks skyward with wistful piano tinkles that come on like the most optimistic of Bukem sonnets over multifarious layers of amens played out like a deft jazz drummer. As the music soars ever upwards through the track it becomes apparent that Stewart has settled into a rhythmic comfort zone as a means to further explore his own musicality, and so the careering tempos of the last album have been replaced by a deeper mining of emotional content.

That’s not to say that every track on Vapor City is a paean to jungle, but it is certainly the engine that motors the vast majority of the cuts. “SeeSea” makes a diversion into a half-step contemplation wrought of dreamy exotica samples and 60s crooner pop, while “U Still Lie” slows everything right down for a slow-dance ballad of the most strung-out kind.

What really stands out though is that the entire collection of tracks melds into a cohesive whole. Whether that came as a result of Stewart picturing an imaginary city in his head as he worked on the album is anybody’s guess, but there’s no escaping the fact that these tracks came together from a shared purpose. There are times that unity acts as a detrimental quality, as vocal snippet after vocal snippet blurs into heartfelt chord sequence after heartfelt chord sequence, but really it’s hard to fault such a complete body of work. Room(s) may have signaled a wealth of promise to come from the long-standing Machinedrum project; Vapor City sees that promise answered.