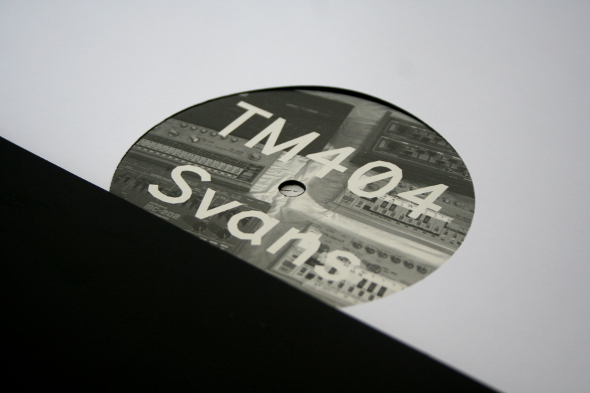 Andreas Tilliander follows his TM404 album for Kontra Musik from earlier this year with the addendum Svans 12″. This writer has mixed emotions about such conceptual works in electronic music, especially when they are coupled with mastery of the hardware or software used to create them. It is often reminiscent of the worst excesses of prog rock and runs the risk of conjuring up disturbing images of cape-wearing musos embarking on three-hour keyboard solos.

Indeed, the machinery that Tilliander uses on this release and his recent album were lionised by people with a background in punk who made the transition to techno – anyone remember the Sabrettes compilation, 101 + 303 + 808 = Now Form a Band? On a superficial level, Tilliander’s tendency to extol his machinery would appear to rail against this philosophy, but thankfully his virtuosity doesn’t descend into pomp.

If anything, if you look beyond the long-winded title of “303/303/303/606/606” the music harks back to an evocative period in electronic music. Starting off dubby and stepping, the expansive arrangement slowly and gradually gives way to acid lines that unfold almost in slow motion, unfurling and coming apart like seedlings fluttering in the wind. That’s not to suggest that it’s light-hearted fluff and the second part of the track resonates with a menacing undercurrent that calls to mind Plastikman’s mid-tempo intensity.

Anyway, Tilliander shows a more mellow approach with B Side track “202/303/303/606/SY1/TG33”. On this occasion, even though the arrangement also unfolds gradually over 12 minutes, the 303s chime in a sublime fashion rather than belching out aggression, while sonic blips and bleeps appear, borrowed ostensibly from Black Dog’s peerless Bytes. Accompanied by chirping birdsong, it reaches a suitably mellow denouement and calls to mind the wide-eyed innocence of mid-90s ambience. Tilliander’s project could so easily have brought us tale of topographical oceans, but instead it presents a stream of consciousness trip through techno’s dusty and often seductive archives.