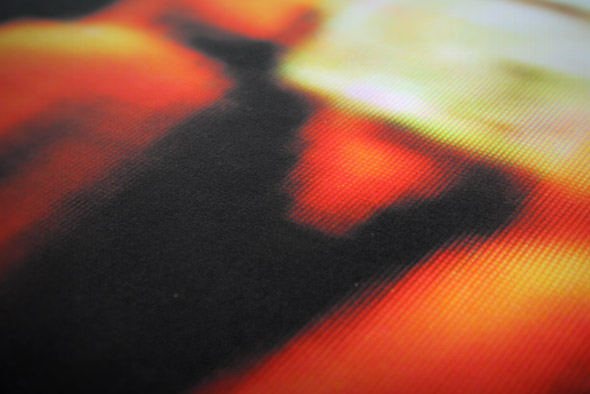 Burma Camp’s release on Avian’s 10″ sub-label Mira is a new venture for The KVB’s Nicholas Wood aka Klaus von Barrel, a fuzzed-out sonic excursion, set out for more industrial sights.  Since their emergence in 2010, the KVB have put out a number of releases, including a 10” appearance on the DNS series from Karl O’Connor’s Downwards imprint, as well as releasing Immaterial Visions on Veronica Vasicka’s Minimal Wave offshoot, Cititrax.

This new side-project is an extension of Wood’s previous work, with Burma Camp thriving on messed-up synths and aggressive drum-machine beats. Decayed electronics envelop the tracks of the Repulsion EP, creating a hazy veil of dizzy isolation. It is almost as if the listener has been trapped in an abandoned tunnel, with the forces of claustrophobia steadily compounding. Exposing a harsher side to Wood’s compositions than The KVB, Burma Camp sits between the mechanical drive of Ike Yard’s dark minimal synth and Vatican Shadow’s fierce brooding hopelessness.

There is an experimental abrasiveness that recalls bands like Wolf Eyes, well known for their noise conjuring antics. Additionally techno leanings become apparent throughout the releases, with hypnotic beats that bring to mind the music of Juan Mendez’s Silent Servant project, who has been instrumental in The KVB’s releases, helping to curate their work on the Downwards label (and notably, he was also responsible for the artwork here).

The title track wastes no time, introducing a gloomy blur of electronics that is present throughout. Staccato drum beats lie on a backdrop of bleak electronics that sweep throughout the track, creating a pressure that is almost suffocating.  Anguished vocals are drenched in reverb, disguising dark incantations that are bellowed without restraint. “Isa” continues in the same ominous vein, with techno beats fuelling the track, building to a point, and spiralling out of control, culminating in a screeching outburst of distorted electronics.

“Attraction” is however much slower and more reflective, with palpable exasperation in the air. It is gentler than the other tracks, with a sense of fragile resolution that accompanies its dispiriting tone. It brings an unexpected close to this KVB side-project, a fine set of tracks that satiate the taste buds of the listener, with a sinister dose of shadowy experimentation.

A. Repulsion
B1. Isa
B2. Attraction