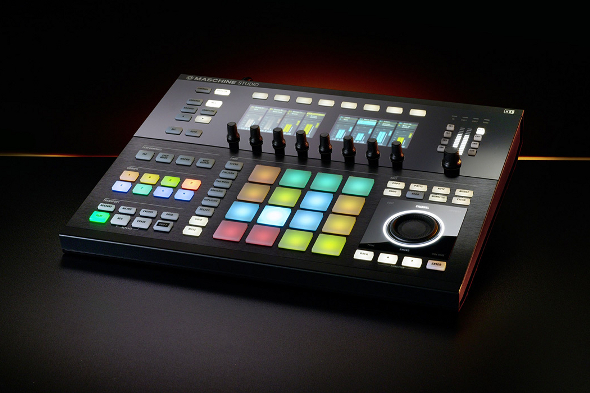 The Berlin company will release a new flagship model in their popular Maschine controller line.

Originally released in 2009, Native Instruments’ Maschine controller has become a popular solution for those looking for a software controlled groovebox solution, evolving from its original incarnation to include the more compact Maschine Mikro, and the Maschine Mk 2, which improved visual feedback. Now Native Instruments have revealed the next addition to the family in the form of the flagship Maschine Studio.

Adopting a larger form than either of its siblings, the Maschine Studio’s increased size gives it room for the addition of a jog wheel to browse, edit, and arrange tracks, a volume level monitor section providing tactile volume control with instant visual feedback, and two high resolution color displays for browsing plug-ins, editing waveforms, checking levels, arranging and mixing, reducing the amount of time spent looking at the monitor, something also aided by the unit’s built-in collapsible stand.

The arrival of the Maschine Studio will also coincide with the release of the release of the new version of the Maschine software. Sporting improvements with regards to browsing, arranging and sampling, it also includes a new plug-in strip, mixer, effects, and new drum synths added to the software’s previously sample-based sounds. The software will be compatible with all previous versions of Maschine, and free with new hardware purchases, though anyone who purchased their unit before today will have to pay to upgrade.