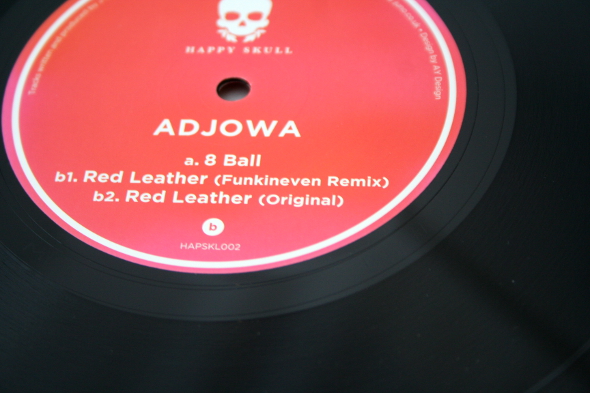 After the sterling first release from Kowton and Hyetal’s Systems Of Desire project, Bristol based label Happy Skull kick off round two with a decidedly fresh talent that marks out those behind the label to have a strong conviction in their curatorial tastes. Adjowa already has something of an online presence, with a slickly finished website alluding to a love of all things black and red, in keeping with a boogie theme expressed through an online mix and now creeping through in his debut release.

The London-based producer did previously feature under a pseudonym on the Don’t Be Afraid affiliated Spargel Trax series, but here we get a clearer picture of what he is about and the first signs are promising. Lead track “8 Ball” starts on something of a false premise as organic found sound matter folds over itself in a manner that might befit a Villalobos thirty-minute saga, leaving you wondering just where this track might be heading (and secretly hoping it’s not going to be a monotonous chore). Then a brief wave of chord and a chunky bass arpeggio later, and the sonic mulch is all but forgotten as the track truly reveals itself.

That aforementioned boogie aesthetic certainly comes through, not least in the romantic synth sweeps that decorate the track, but the rhythmic structure is very much in the crisp, workable realms of late night house music. Quite simply, the track is a marvelous dancefloor cut, weighty where it counts, a touch psychedelic on top, sexy and serious all in the same bar. It’s the kind of jam that would sit very comfortably alongside Moon B and Royalty, the new wave of electro-funk inflected producers bringing that lurid groove to a modern context.

“Red Leather” goes even more explicitly into 80s territory, with pounding, reverbed snares and claps of the most bombastic kind, while the chord swells and delicate arpeggios are pure shoulder-pad balladry. Still through this a certain degree of poise remains, carrying through the lessons learnt about restraint equaling impact in contemporary dance music, and the moments where the elements hang for half a bar before slipping back into the groove make it all the sweeter. It’s an uncluttered arrangement that sounds as though it were perfectly crafted for a dry Martini with an olive on a stick, slow and easy but with enough punch to make one lower their Wayfarers and possibly cock an eyebrow.

Sitting pretty on the B1 is a remixer perfectly pitched for a task such as this, given the run of “Red Leather” for his own twisted vision of box jam brilliance. Funkineven stands apart from the rest of the boogie revivalists as his creations come doused in just as much gnarly acid as they do slick funk, and the meeting in the middle is often a jarring, on-the-edge blast of artistic statement that could come from no-one but him. His version in this instance is certainly a rasping one, taking one of the more primal arpeggiated lines from the original and running it over the top of some raw-as-you-like drums that spit, hiss and snarl out a jerky 4/4 mantra for the well-greased robot dancers. For an approach that uses so few tricks, Funkineven knows how to make his tools jump and prance throughout the track so as to never feel static.