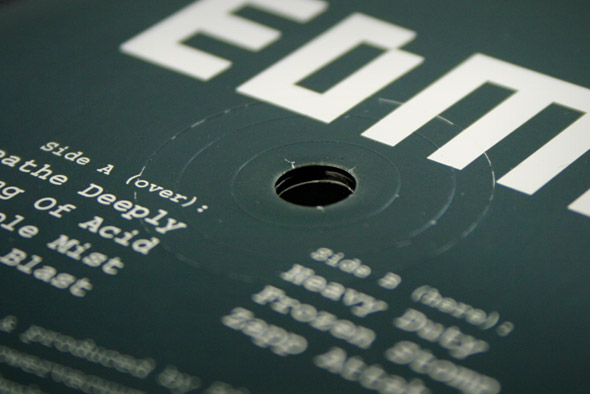 For those that might not have checked it already, there is always a story that accompanies each Power Vacuum release – a non-linear ramble that plays up to the correlation between electronic music and sci-fi and uses track titles and producers as cue points. It could be considered trite ephemera that ranks as unimportant against the quality of the music, but it does in fact mark out a label committed to creating a stout aesthetic, which is welcome in these times of artist-motivated ventures with no presentation purpose. The fact that there is an underlying tongue in cheek humour in the text only adds to the impact; serious music that doesn’t take itself too seriously.

Last time EDMX came to play, he brought the fearsome beast “Cerberus” with him, and it ranked as one of the most addictively ear-bleeding techno tracks of the year. This time around, he has a plentiful seven selections of steroid-fuelled acid and techno very much wrought from the same smoldering rave furnace, ranging from long form tracks to momentary blasts of ideas. “Breathe Deeply” certainly calls to mind “Cerberus” with that apocalyptic kick, while the menacing breath samples lend a Belgian New Beat intensity to the proceedings. There is actually more subtlety to be divulged from the production this time around, from the loops of horror strings murmuring in the undergrowth to the echoing rim shots, but the acid line blasts all that nonsense away in one precision shot.

“Heavy Duty” comes from the same lineage of big room dynamics, this time turning to a chunky synth line that would border on anthemic were it not so minor in its composition. “Ring Of Acid”, one of the shorter tracks on the release, ramps the tempo up and in the process starts to conjure up some of EDMX’s electro tendencies, which go some small way to softening the edges of the malevolent techno he serves up for Power Vacuum.

“Frozen Storm” too injects a cheeky funk into its construction which provides a healthy diversion; although in this particular case the mammoth bass synth is still to be found growling out a fairly oppressive message – a feeling only enhanced by the discordant swells that drift in and out of the mix. While the sheer brutality of the tracks is a great deal of the appeal on Power Vacuum, it is always good to hear variety and “Purple Mist” brings just that with a nervous number that trickles out like Arpanet on a sinister day. It’s the perfect pitch of electro that stops short of diluting the nastiness of the record, but rather enhances it through nefarious means.

Likewise those whispers of electro found dotted around the tracks make for a pleasant sonic stamp on EDMX’s part, ensuring that whatever pace and whatever intensity he aims for, the music will always come out sounding like him.