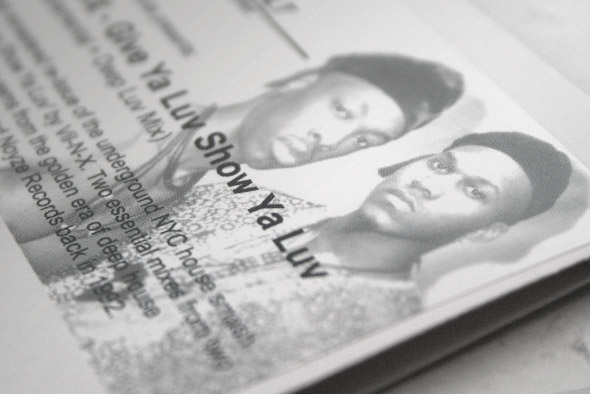 Since its foundation in 2009, Echovolt Records has become an Athens-based outpost for those interested in the seemingly endless potential of analogue driven dancefloor tracks. Variously touching on drum machine workouts, revisionist analogue deep house and psychedelic electronics, its releases to date have featured such well-regarded contributors as the rarely used L.I.E.S alias of Steve Summers and Ron Morelli, Legowelt, Simoncino and Professor Genius; a kind of who’s who of drum machine fetishism. Given the calibre of these artists and their extensive use of old equipment and vintage dancefloor influences, it was probably only a matter of time before Echovolt began to look back properly, reissuing well-regarded but often overlooked tracks from the halcyon days of house and techno. That they’ve chosen a deliciously warm and tactile chunk of New Jersey garage-influenced deep house for their first reissue is perhaps more surprising, but it’s a particularly canny choice.

For starters, it comes from Vil-N-X, an act whose own ‘renaissance’ has been well documented. In 2010, one half of the duo, Nathaniel X, made his own belated comeback with The Ressurixion EP on My Love Is Underground. Featuring a mix of unreleased ‘90s originals, reworks and new tracks in his distinctive New Jersey deep house style, it was one of the “must have” house records of the year. Further missives from the American producer followed, before he reunited with his old Vil-N-X sparring partner, Hans Vil, for The Lazarus Theory, their first new 12” in nigh on 20 years. It dropped on Kolour’s Undertone offshoot earlier this year and hit home hard, primarily because it sounded like an authentic snapshot of the golden age of New York and New Jersey deep house. It could have been made in 1992.

The pair’s original work from that period has long been recorded by underground house heads – both those of a certain vintage and younger diggers with a passion for old sounds – as essential. The duo first made their name with a string of releases on their own Island Noyze label, the likes of “Visions of Paradise” (as Island Noyze Productions), the sublime “De’Jah Vu” (a particularly intoxicating slice of early ‘90s US deep house) and the Mr Fingers-esque “What Cha Gonna Do”.

In truth, Echovolt could feasibly have re-released any of these; they have aged remarkably well, and still sound fresh despite their vintage. Instead, they opted for arguably the duo’s best-known single from the period, 1992’s “Giv Ya Luv Show Ya Luv”. This is not a criticism: you see, it’s probably the best example of the duo’s inimitable style. For the record, Echovolt have chosen the two best mixes of the track (and there were many first time around) and given them the full re-master treatment. As a result, both tracks sparkle whilst retaining the analogue warmth that so marked out the duo’s early ‘90s sound. The “Clubstramental Mix”, blessed as it is with heady keys solos – played on that synthesized woodwind setting so beloved of US deep house producers between 1989 and ’92 – hits home hardest. It’s groove bounces magnificently, offering skipping snares, drummer-style flexible fills and hissing cymbals. There’s just a touch of piano, some rolling, incessant riffs and a bassline to die for. It’s as near to perfection as deep house from the period gets.

The “Deep Luv Mix” is effortlessly soulful, showing far greater influence from the sort of New Jersey garage records that Tony Humphries – a huge player at the time – was championing around the time it was made. Kicking off with a bold but sumptuous piano riff, it alternates between cute organ riffs, rolling chords and subtle blasts of vocal, all the while working its unfussy but beautifully programmed groove. It summarizes all that was good about deep house and US garage from that period. 21 years after its initial release, it still sounds great – proof, if any were needed, of the enduring quality of Vil-N-X’s sublime deep house productions.