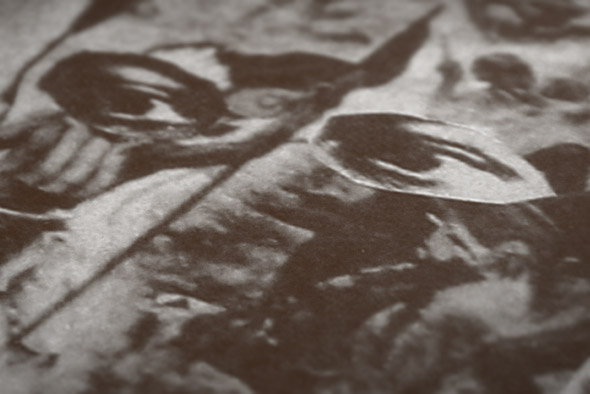 It’s almost impossible to write about Huerco S. without mentioning the faintly ridiculous “outsider house” tag that seems to have stuck to him since he made his name through releases for Wicked Bass, Opal Tapes and Future Times. Until recently located in Kansas City, the producer otherwise known as Brian Leeds fits the archetype – he’s suitably distanced from any relevant scenes, he doesn’t spend too much time tweaking EQs, and he began producing on an old desktop PC. His music is lo-fi, yes, coated in a deeply engrained grubbiness, predominantly with a regular 4/4 beat, but it’s also warm, sensual stuff. If Leeds had been releasing music four years ago it probably would have been classified as “hypnagogic pop” thanks to the disconcerting sense of familiarity his music evokes.

Thankfully, Leeds’ debut album Colonial Patterns is not an album of house music, outsider or otherwise. The literature surrounding the album states that it takes inspiration from architect Paolo Soleri, famed for his Arcological fusion of architecture and ecology, and the ancient Native American mound city of Cahokia, a location close to his home in the mid-west. It’s an influence present in the track titles; “’Iińzhiid”, “Monks Mound (Arcology)” and “Quivira” all seem to make reference to this pre-Columbus America. Cast in a muddy palette of sepia tones, earthy browns gravelly greys, Colonial Patterns is about as aurally close to this dusty pre-historic landscape as you could imagine. “Plucked From The Ground, Towards The Sun” has that feel of something loosely bolted together with primitive tools, with the steady rhythmic heartbeat and harsh metallic scrapes sounding like they were created in Ableton from flint, maize and arrowheads.

Despite its historical themes, Colonial Patterns is as much an album that seems influenced by the contemporary American landscape. The clanking percussion of “Quivira” sounds like the clapped-out machinery of an ancient Texan oil well, while the piston-driven mechanics of “’Iińzhiid” are accompanied with the kind of thick ‘80s VHS textures common to the likes of Oneohtrix Point Never and James Ferraro. The early work of OPN is perhaps one of the album’s most obvious reference points, so it’s unsurprising that it has been released on Daniel Lopatin’s Software label. The drifting synth waves of “Struck With Deer Lungs”, sidechained cross-dimensional bliss of “Hopewell (Devil)” and swelling vapours of “Monks Mound (Arcology)” all recall the material on Lopatin’s Rifts, but where Rifts created a vivid alien landscape of impossible yet tangible structures, Colonial Patterns’ music lies just out of reach, the detritus of the past and present of US civilization obscured by an opaque glass screen bristling with static and white noise.

Of course the album isn’t all focused through an ambient lens, having its fair share of tracks that could be loosely considered techno or house. “Prinzif” comes across most like his Future Times material, its weighty rhythmic shackles and Chicago-inspired bassline slowly emerging from a blackened sea of tape warble, while “Ragtime U.S.A. (Warning)” sees a chopped and screwed take on house with decayed strings which constantly hover in a state of transcendental bliss. The uptempo pulse of “Canticoy” is perhaps most intriguing, delivering the sound of a warehouse party in early ‘90s Detroit being heard though a long-range satellite array. It seems that Leeds isn’t so much recreating these well-worn genre tropes in his own way as he is transmitting them through the past into the present via short-wave radio, allowing the signal to degrade in the process; amidst the dustbowl landscape and narrow ravines of Colonial Patterns these degradations create a disconcerting series of high-pitched whines and windows to other worlds that hypnotise and lure you into their lapping liquid surfaces. That Leeds is a fan of Basic Channel is no surprise; these tracks practically invite you to dive in to their fluid, if slightly more gritty constructs.

Whether you choose to engage with Leeds’ more conceptual elements or not seems somewhat irrelevant in the face of the music on Colonial Patterns, which it must be said is exceptional, displaying an obvious craftsmanship which flies in the face of the assumed workflow of the lo-fi producer. An increasing number seem to be choosing this route for aesthetic reasons, but few have made the most of it in the way Leeds does here; it would have been all too easy for the tape flutter, vinyl crackle and muddied frequencies to have become overbearing over a full-length, but each textural blemish is as important to the oblique meaning as the choice of the notes themselves. This aesthetic may have been the subject of fierce debate recently, and will likely be dragged out until it dies the same death as chillwave, but it’s not hard to imagine Colonial Patterns being one of its most enduring documents.