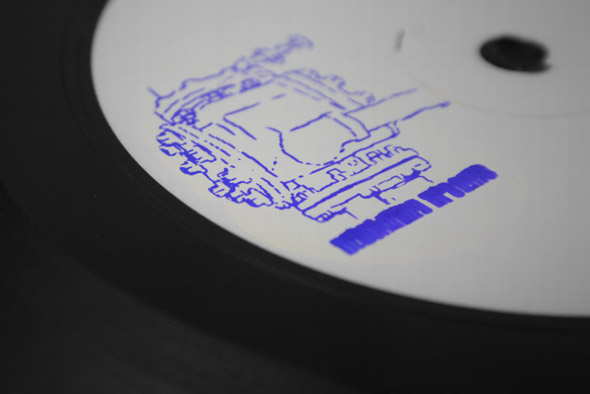 Keeping up with Jamal Moss’s catalogue is like playing Whack-A-Mole. His own records and those of his label Mathematics appear with little warning and even less adherence to things like release dates, popping up for a couple of days in a handful of shops before being consigned to increasingly absurdly priced Discogs listings. Moss is also famously prolific, and keeping up with his aliases is just as tricky. Of the records Moss has released so far this year, the Root Frequencies Project 12″ has most in common with The Sun God’s The Spirits Have Spoken, hinging as they both do on peremptory, highly distorted drums offset against chiffon melodies constantly threatening to veer off into the periphery. The tracks here are at once in-your-face and somehow diaphanous, the percussion and its celestial ornamentation seemingly operating on two separate but interlocking planes.

“Root Frequencies” is rooted in a globular bassline that seems to flit without warning between figures, never willing to alight on one for more than a few bars. The track undergoes a gradual expansion as new elements begin to orbit around the bottom end, which itself wanders in and out of hazy focus. That bass becomes ever more frenetic over the first half of the track before splitting in two, separating double helix style, each part of the pair playing off against the other in a manner that frequently approaches the atonal and that veers close to the polyrhythmic.

“Memory Disruption”, meanwhile, is an altogether stouter beast. The percussion, gleefully distorted, immediately brings to mind Kyle Hall’s cathartic ‘Dr Crunch’, while chords flit around so haunted house in nature that you can practically see the corner of Moss’s mouth turned up in is-this-too-far amusement. Again on “Memory Disruption” elements come in and out of the fug as if at the mercy of a film set’s half-cut focus puller. There is a dial tone drone that appears at intervals; a furious hat that emerges front and centre to disconcerting effect; a piccolo snare that demands unwavering attention before vanishing without trace.

If “Root Frequencies” and “Memory Disruption” were about browbeating sparsity, “Hashish” takes the distorted Detroitism and plays it through a pseudo-acid refractor. The track is as hooky as any you are likely to find in Moss’s catalogue, a hiccupping vocal sample split into demented, jerking triads providing the entry point into a bizarre landscape of phasing static and carbonated hats. Both sides here slowly unfurl out of themselves, experimenting with patterns almost ad nauseum, but it is on “Memory Disruption” that this tendency is best demonstrated. The track cycles through perhaps three separate movements in its eight minutes, but you would be hard-pushed to locate the moment at which any of them shifts. It is a gradual fanning out of the hysteric; a decompressing of the symptoms of a technicolour psychosis.

The photograph circulating of the Root Frequencies Project is a detail of one corner of the label, smudged as if the printer ink hadn’t had time to dry before the record had been played. It’s a nice indicator for the set and for Moss’s work more generally: perpetually wandering outside the margins; revelling in its own imperfections; and with its focus on imparting the largest amount of cosmic meaning with the limited technology to hand. A highlight amongst the Mathematics boss’s excellent recent output.

A. Root Frequencies
B1. Memory Disruption
B2. Hashish