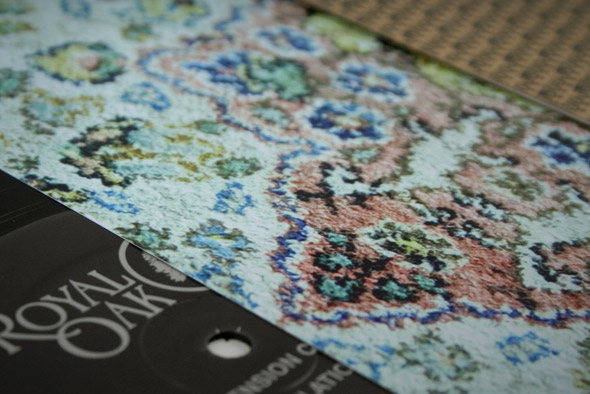 If you struggled to get a handle on Jack Hamill’s much-vaunted Welcome To Mikrosector-50 album, you’re not alone. While it had its charms – not least a series of tough, P-funk influenced cuts and heaps of Hamill’s usual emotion-rich, stargazing melodies – the elaborate concept and garbled, intergalactic narrative even left seasoned Space Dimension Controller admirers scratching their heads. It wasn’t a bad album – Hamill is too talented a producer for that – but it struggled to live up to expectations. By broadening his horizons to more accurately reflect his influences, while trying to tell a story in music, the Northern Irishman probably just bit off more than he could chew. One day, we might look back on it as a masterpiece; at the moment, it just seems a little flat.

Perhaps Hamill realises this, because this first release since the album dropped is an altogether more focused affair. Back on Clone’s Royal Oak label for the first time since 2010’s sublime Journey To The Core of the Unknown Sphere, it largely eschews lofty concepts in favour of what he does best: warm, colourful, melodic, deep and spacious electronic music to please headphone-clad listeners and dancers alike.

Correlation #1 is, apparently, the first of a series of five EPs for the Dutch label, which should come as a pleasant surprise for all those who loved his breakthrough material. Those keen on his eccentric approach will be pleased by the EP’s one concession to his love of concepts; Hamill has created an image to accompany each of the tracks, with each 12” coming shipped with one of the five prints randomly inserted. From the start, the signs are good. “First Glance” is built around echo-laden snares and cymbals and a bubbling analogue bassline, bristles with Hamill’s early trademarks. It builds carefully, creating a wide-eyed mood via unfurling synthesizer melodies, inter-planetary chords and those darting electrofunk synth solos. It’s nothing new, but when you’re capable of creating such emotive music with a tried-and-tested formula, there’s little need to push the boat out.

“Familiar Terrain” ups the tempo and heads towards the dancefloor, delivering an intoxicating groove that sits somewhere between dub techno, Detroit futurism and the sort of danceable “ambient house” that once (briefly, sometime around the start of the 1990s) that seemed to permanently be glancing skywards. It is heady and hypnotic; classic techno at a deep house tempo. There’s more in this vein on “Chemoreceptor”, a sparse, bubbling concoction whose opening phase – which consists of little more than a subdued kick and looped, distant melody – is little less than spine-tingling. There’s a touch more grit to the fuzzy bassline and faintly threatening synthesizers, but Hamill’s trademark melodic warmth and touchy-feely futurism is rarely far away. The results are deep and melancholic, with just a hint of happiness around the corner. If there’s one thing Hamill does well its bitter sweet. “Chemoreceptor” is as bitter sweet as they come.

While ambient closer “Petrichor” shows Hamill hasn’t lost the ability to create unfussy, immersive soundscapes, it seems a little out of place. More in keeping with the EP’s introspective but quietly joyful mood is “Butterflies of Malaysia”, a slice of tropical melancholia that’s arguably up there with his best work to date. With the Northern Irishman’s tactile chords and eyes-wide-shut melodies to the fore, it seems to tumble from the speakers like a mountain stream glistening in the moonlight. It feels a little old-fashioned – this kind of emotive, dancefloor-rooted electronica, inspired by a combination of techno, deep house, Brian Eno and strong MDMA, was all the rage throughout the 1990s – but that almost adds to the charm.

Throughout his career, Hamill has seemed like a young man out of step with trends, or at least oblivious to them. It’s this quality that makes him such a special talent. As Correlation #1 proves throughout, Hamill is a genuine one-off. We should cherish his productions, eccentricities and all.