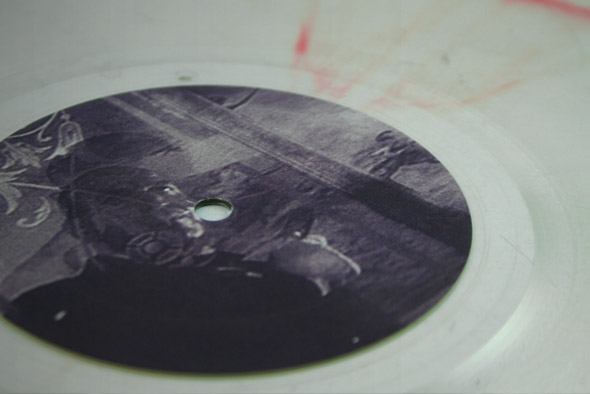 Violetshaped’s self-titled album is one of the year’s most relentless records. Self-released but seeming to have emerged straight from the Morphine catalogue, the collaboration between Violet Poison and Shapednoise recalls Metasplice at their most ornery: a cataclysmic shudder of pneumatics. It’s a noirish take on the increasingly busy intersection between techno, noise, and industrial music, but it is also one of the field’s most enduringly satisfying efforts, taking a grim fork in that well-travelled road.

The record was, unusually, preceded by a trio of remixes, each of which helped to establish the project’s viciously monochrome tone. Roly Porter contributed a barbarous rework of “The Lord Won’t Forget”, stripping the track of its clamorous kick and replacing it with a nauseating bass undulation. Vatican Shadow further demented the pendulous drums of “Delusory Parasitosis” with yet more metallic distortion, while Kangding Ray’s excellent revisiting of previous EP track “The Oven” dialled back the mania of the original in favour of a vertiginous swing.

Now, almost six months after the album’s release, Violetshaped have garnered attention for less auspicious reasons. When the pair appeared at July’s Berlin Atonal festival their set was reportedly accompanied by clips of female rape scenes from Italian horror films. Violet Poison has since all but recanted, and maintains that they will not use the visuals again. But, as Violetshaped gather together another enviable group of remixers, it is perhaps for the best that these tracks are, for the moment, taken out of their hands.

Keith Fullerton Whitman, Godflesh and ex-Napalm Death member Justin Broadrick, and Raster Noton’s Grischa Lichtenberger all appear on the set, and the results are fascinating. Whitman takes on album closer “Anesthesia”, a track that in its original form shimmers with a noise halfway between an incessant bell and nails on a blackboard, before vaporous pistons bring it to a climax. In Whitman’s hands the track becomes a 13-minute anthropology: a beautiful study of a series of modular creatures inhabiting an uncanny landscape.

Gulping noises, each seemingly shorn from a melody that seems to exist somewhere just out of reach, ricochet around the vista, often panned so aggressively that they appear to be darting out from behind your head. The track sees Whitman in less demonstrative mood than on his excellent recent split with Floris VanHoof, but no less playful. The acutely physical world he has constructed here is far less menacing than that built by Violetshaped; indeed, it seems like it might be a pretty fun place to be.

Meanwhile Justin Broadrick, under his JK Flesh moniker, delivers a pleasingly misleading rework of “cX310”. It begins in inauspicious fashion, with tremolo melodies offset against breathy kicks. Midway through, though, Broadrick suddenly detonates the track into a feverish rash of jungle drums, puncturing the pall with grim treble. The shift is so surprising, and so effective, that I half wondered about inserting a spoiler warning at the beginning of this paragraph.

Grischa Lichtenberger’s version of “Spectral Nightdrive” is meticulously engineered, retaining the clamorous, cut-up percussive approach of the original but stripping back the layers of smudgy muck in favour of clapboard highs and globular bottom end. Triads of pitched-down rim-of-glass flutter intimidatingly around the edge of the mix, while elastic static pings across the foreground. Towards the end the track collapses, falling rapidly into agonisingly decayed strings seemingly bowed with a warped saw. This is perhaps the most intricately constructed of the three, with new elements so incessantly introduced that by its midpoint the track seems to sustain itself by its sheer weight, thundering slowly along like some mechanised animal.

Last month Shapednoise told Juno Plus that the first Violetshaped remix EP was released before the album in order to make “a clear statement on what the sound of the Violet Poison imprint would be.” On the strength of these two releases, it can be determined that the label’s signal qualities are likely to be innovation and surprise. To run Keith Fullerton Whitman and the founder of Godflesh consecutively on a single release is an inspired decision. The third instalment, if one is coming, will surely be just as compelling.