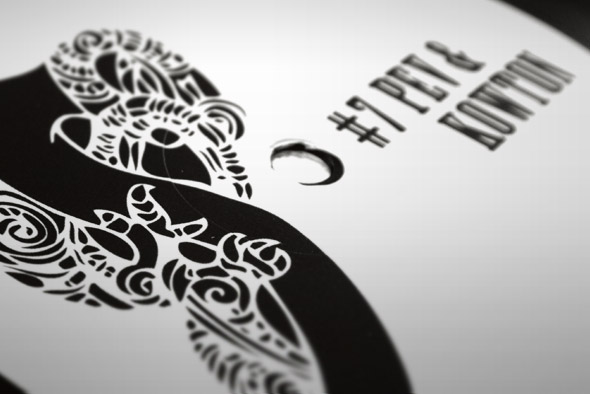 There is a reason the Livity Sound collective are held in such high regard. As the label matures into its seventh release and on the eve of a compilation CD documenting the dawn of the label, it becomes ever more apparent why Peverelist, Kowton and Asusu’s venture has commanded such respect over the past two years. Considered as a whole, Livity feels as though it has a cohesive aesthetic, both in the music released and in the stark imagery the black and white designs convey. When you add in the unifying quality of the live set, in which the component label material gets performed by all three artists, it makes for an almost homogenous impression of what Livity stands for.

Yet, zooming in to the details, the records that have been released are actually surprisingly wide-ranging. Pev’s rhythmic incantations on “Aztec Chant” are a sizable distance from the raw, unflinching 4/4 rasp of Kowton’s “Jam 01”. Meanwhile Asusu’s two 12”s have sported positively bi-polar sides, half delving into atmospheric, dub-inflected house (“Sister” / “Rendering”) and half cast adrift in wild, broken terrain made up of industrial percussion (“Too Much Time Has Passed” / “Velez”). As we come to the third collaborative release from Pev and Kowton after the inaugural Beneath Radar and the Hessle Audio burner Raw Code, it’s the joint thrills of unpredictability and originality that cement what it is that holds Livity Sound together.

There are noticeable signifiers in the opening strains of “End Point” that correlate to past offerings from label and artists, such as the forlorn siren pulse that calls out once a bar, but already a chord is stirring underneath a filter mask that suggests something different is on its way in. After the tension ever rises to breaking point, the melodic refrain that takes hold deals an emotional sideswipe of magnificent proportions, calling to mind the haunting resonance of vintage Autechre at their synth-iest. “Raw Code” might have sported some bold strokes of melody but still remained in an ambiguous heart space. The rhythmic machinations of both artists are still ever-present, and the track snaps forwards with purpose, but it’s a softer touch felt here compared to the gritty punch that normally occurs when they bump heads.

“Vapours” certainly starts in a territory more familiar to followers of Livity, the eerie chimes echoing the icy strings that hung forebodingly over the Beneath Radar 12”. Too you can hear a whipcrack clap come snarling through the fog with the trademark Kowton bite, but it’s all a foil to the latest curveball to be slung into the ongoing narrative of the label, as a stuttering conga pattern takes hold. It’s an unexpected turn that works brilliantly, tricky in its demeanour but still potent as a deadly hook into the alien patter of the track.

Where the aforementioned Hessle Audio release found Pev and Kowton crafting powerful floor wreckers loaded with bass and yet nimble in their groove, this record opts for a more psychoactive stance. It’s utterly believable that the music came from these two, and it fits perfectly in its place on Livity, and at the same time it forges something vital and adventurous, thus summing up exactly what it is that makes the label such a special one. The further the catalogue goes on, the more exciting it gets thinking about where it will head in the future, marking out a true original in a world full of imitation and repetition.

A. End Point
B. Vapours