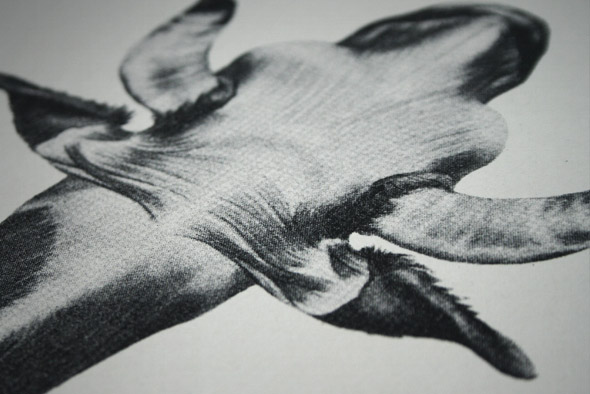 Best known for their work as Raime, Tom Halstead and Joe Andrews are also responsible for Blackest Ever Black’s latest release, expanding on their differing approach under the Moin moniker. This self titled EP by the London based duo separates itself from Raime’s distinctive dark breed of electronics while providing an approach that is more stripped down. Where guitars take the forefront, there is a keen reference to post-punk influences, perhaps even drone metal. Without forgetting their affinity for darkness, a clear aesthetic that has matured throughout their involvement with Kiran Sande’s label, this EP delves into themes that have been associated with previous Raime releases.

Moin first manifested last year, gracing BEBs Confessions series with the track “Elsie” which shared sides of a 7” with Pete Swanson. A mesmeric auditory tonic, “Elsie” preceded recent work with a charm that is ear-splittingly cathartic. And although this initial release set the tone for work to come, Moin’s tracks here perhaps have a different kind of drive. Primitive drums and commanding bass set the pace, reining in the tracks and letting them build in just the right way. As desolate droning guitars are soon eclipsed by more angular strumming, reverberation is glorified. These dark guitars slowly compound, forming carefully prescribed bursts of passion.

The listener is introduced to these elusive guitars through the opening track “Murphy”, slowly emerging sounds that resonate throughout the EP. “Stacie” brings together gnarled textures with almost squeaky thin tones, piercing through jagged terrain. Sullen vocals that are sparsely scattered throughout are sharp bitter jabs throughout the tracks of the EP. “Clancy” builds on the same coarse bed of guitars found in the other tracks, with heavy harmonies that meld together in a feedback induced cohesion, tying together the tracks of Moin’s release in one last exuberant outburst.

The three tracks of this EP reveal that Andrews and Halstead are fuelled by a large range influences, going beyond the obvious musical inspiration that might be expected from their established work as Raime. It seems they are willing to experiment with their musical palette, stepping outside of the music they are know best for whilst retaining the inherently dark, brooding nature.