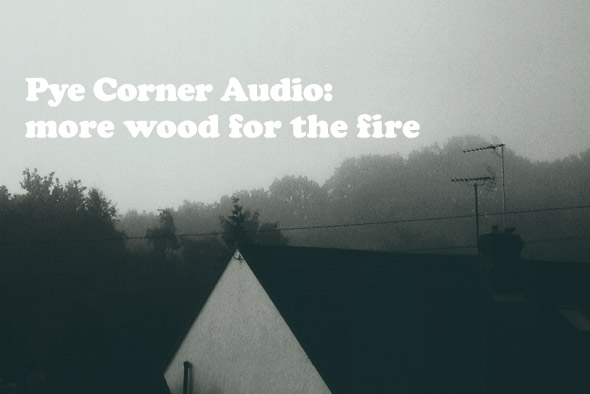 Oli Warwick speaks to Martin Jenkins, whose celebrated canon of work as Pye Corner Audio is soon to blessed by an album under the name The House In The Woods.

Slowly emerging in a shroud of mystique and antiquated charm since late 2010, Pye Corner Audio has crafted a compelling array of homespun releases loaded with a palpable, alluring eeriness from the first volume of self-released Black Mill Tapes to the ever-broadening catalogue that Martin Jenkins now lays claim to. Beyond the immersive sound world his craft has given rise to, there is an equal importance placed on presentation and aesthetic, every iota of detail about the Head Technician and his sonic quest feeding into a conceptual finish that serves to embolden the music. Attempting to peel back the layers to find the truth behind the project comes as a mixed task; human curiosity will always crave an understanding of the reality behind the fantasy, but it also feels at odds with the venture to understand too much about what goes on behind the scenes of the artistic escapade.

Be that as it may, it feels reassuring to know that the heavy impression left by the presentation of Pye Corner plays a bigger role in the creative process than one might even suspect. “Initially [the mythology] was a way of abdicating responsibility for the music,” says Jenkins of the Black Mill Tapes series that introduced Pye Corner to the world. “They were just these tapes that Head Technician had 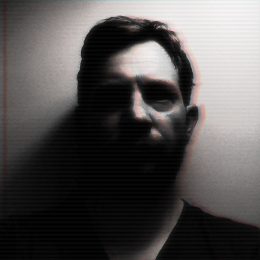 come across and he wanted to transfer them to a digital medium. It really seemed to strike a chord with a lot of people, so I delved a little deeper.”

From a convenient get-out clause at the genesis of the project, the creative veneer built up around the music has become a jump-off point that in many cases arises before the machines have even been fired up. There’s admittance from Jenkins that he uses external forces as a direct inspiration for the ensuing music, arguably flipping the traditional music-then-title-then-artwork process that pervades a vast majority of contemporary production. In some ways it harks back to the most beleaguered of musical notions; the concept album.

“[The concept] is hugely important,” he states. “I try to create a certain mood from the very beginning. I don’t always have track titles, but the album title is always in place before any work commences. The Black Mill Tape digital releases all contain a PDF of artwork that contains a collage of photographs that I amass before and during production. These serve as inspirational cues for me.”

Even the name Pye Corner Audio comes from a real-world signpost that Jenkins would often drive past, using the inferred imagery he would pick up to form a starting block for a body of work now five albums and some six singles deep. The results are undeniable; a very present and evocative tone hangs heavy in the music, whether accompanied by the artwork or listened to independently. A large part of the material comes in the form of dusky vignettes where lonely synthesisers call out across fog-laden soundscapes of fuzz and dust, crafted as though the “inspirational cues” were in fact a dystopian cinematic romp Jenkins was specifically tasked to.

Unsurprisingly, given his use of visual and textual leads when making his music, Jenkins has a deep love for soundtracks: “As underscore, the music needs to leave space and support the image. For me though, things get interesting when the image is no longer present. These spaces can be filled by the imagination of the listener.”

“I felt extremely liberated after coming to the realisation that there is no absolute final version of a song. There are just alternative interpretations.”

He also alludes to the resurgent interest in classic soundtracks, as made evident by the likes of Death Waltz and their mining of the works of artists such as John Carpenter and Alan Howarth. As well as the purposeful task such music was created for, there is also a focus at present on the stylistic finish associated with that 1970s-80s era of electronic music. It’s a trend that has also been feeding into dancefloor concerns, predominantly house and techno, with Jenkins openly championing the likes of Andy Stott with whom he shares some anti-production values.

“Personally, I like the fact that not everything is revealed, there’s something hidden beneath that layer of dust,” Jenkins says of the appeal of lo-fi production. “It leaves a little more to the imagination. I don’t want everything to be so obvious and signposted, but super clean production is the norm with the tools now available.”

However it’s not all tense drones and ambient tones in Pye Corner. Even from the first emissions there have been moments of outright groove, from the motoring thrum of “Electronic Rhythm Number Eight” on Black Mill Tapes Volume 1 to the slow-motion stomp of “Electronic Rhythm Number Five” on volume three. Jenkins has made no secret of his love of Detroit techno and krautrock in other interviews, although such influences present themselves in such a way as to meld smoothly into the Pye-niverse.

“The LPs have always featured these elements,” Jenkins says of his more rhythmic tracks, “but I’m currently looking into ways of bringing more of this to the live performances. I’ve got a few things on the go at the moment. I think I’m going to do an EP of Detroit-esque tracks under the name Rural Robotics.”

While an expansion on the ideas laid out in tracks like those mentioned above is certainly tantalising, for the time being there are other splinter factions of Jenkins’ creativity manifesting imminently. The House In The Woods moniker first surfaced around the same time as Pye Corner Audio, both projects born out of Jenkins’ move out of London, although up until now there had been just one split EP with 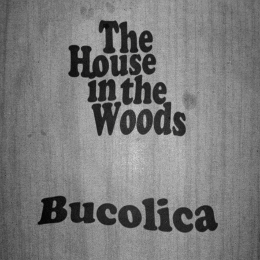 Millieu side-project Coppice Halifax released as a limited CD-R. Now a full length release is forthcoming on Exotic Pylon entitled Bucolica, and it shears away the pulses that linger in Pye Corner Audio to set adrift in an utterly beatless abandon of emotionally charged drone music. That said, in the winsome melodies that still haunt The House In The Woods, it could be argued there is scope for crossover between the two projects.

“The House In The Woods really came about through the discovery of a certain way of working,” Jenkins explains. “It’s largely field recordings manipulated in quite a specific way, so it’s relatively straightforward to keep the two projects separate. Cross contamination occasionally occurs if I forget to wash my hands though.”

In speaking of method as an influence on Jenkins’ music, it’s worth looking to the tongue-in-cheek Discogs biography for The Head Technician that describes him as, “inventor of the ‘psychic stereophonic reproduction’ technique. Currently perfecting his wood-fired mastering method.” Of course, such details can’t go unnoticed and so it has to be asked, is there any merit behind the humour?

“As weird as it sounds,” Jenkins reveals, “there is a grain of truth to the wood-fired mastering method.” He neglected to reveal any more about how wood-fired mastering might be performed, and so once again we’re left using our imaginations to fill in the gaps. All that he would divulge was that The House In The Woods material, “benefits greatly from the technique”.

Wood-firing may take vintage processes to great extremes, but it’s instantly apparent listening to Jenkins’ music that his methods are rooted in the past. With a rich history in studio engineering that saw him working with the likes of Trevor Jackson and Mat Johnson of The The, the post-urban phase of his musical career has seen him moving away from the quest for sonic perfection and actively reacting against the creative blockades such concerns can encourage.

“I was starting to feel slightly jaded, and needed a new way of looking at music, and the Head Technician allowed me to strip away all the musical baggage that I’d accumulated over the years,” he says. “I totally simplified the studio setup and wanted to get away from the curse of choices that modern software makes available to you.” 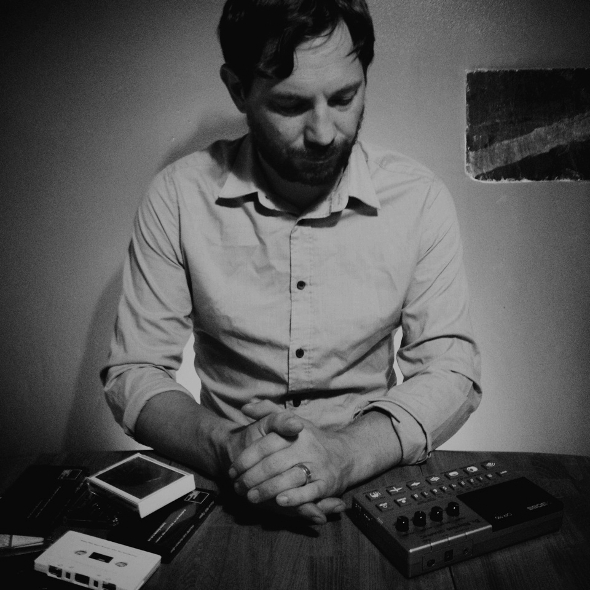 Extolling the virtues of being free of the demands of, “frantically automating desk mutes on 48-track tape mix sessions to keep the noise at bay”, Jenkins now revels in the limitations imposed by a select kit list. A large portion of Pye Corner Audio is centred around a specific machine for specific recordings, such as a “rather shabby Japanese mono-synth of no great pedigree” that formed the sole sound source for Black Mill Tapes Volume 2.

“I spend less time pondering the what-ifs, more time doing, then moving on,” he says. “Given the chance, I can work very quickly. I definitely embrace imperfection. In my days as an engineer I spent so much time polishing performances and correcting mistakes that I realised it made for pretty sterile recordings. I also felt extremely liberated after coming to the realisation that there is no absolute final version of a song. There are just alternative interpretations. Once I stopped chasing that elusive perfection, things eased massively.”

The same stripping down and simplifying is still taking place, as Jenkins reevaluates his live set up to further cut ties with the modern modes of musicianship. “I’ve recently moved to a hardware-only live setup, so removing the safety net of the laptop,” Jenkins states. “Listening back, I always thought the improvised sections of the performances worked the best.”

In taking this step, it of course raises the question of how that impacts the studio work. When engaged with a performance where improvisation is key, there is always scope for happy accidents that could lead to memorable recorded material down the line, and already Jenkins is bearing the fruits of such endeavors. “Hexden Channel [taken from Black Mill Tapes Volume 3] features a live recording quite prominently and I often repurpose parts from live sets,” he reveals. Elsewhere the Tapeworm cassette release The Ever-Present Hum was born out of the live set up, with further plans for releases using the same methods, as Jenkins continues to reach backwards to a more impulsive, performed means of making music.

Also on the horizon is a vinyl edition of the third and fourth volumes of the Black Mill Tapes, again on Type as was the wax version of the first two, while an undisclosed split LP and an additional full-length for Ghost Box are also in the works. Add in to the mix the aforementioned Rural Robotics project (you heard it here first) and it becomes instantly apparent that Jenkins has a prolific way about him, perhaps a combination of his experience in studios large and small, combined with this renewed vigour as a result of the back-to-basics approach. Whatever it is, it gives rise to some of the most arresting electronic music to be emanating from an undisclosed corner of Great Britain, and it looks like it won’t be going anywhere for a good long while.

Bucolica by The House In The Woods will be released on Exotic Pylon on September 30. 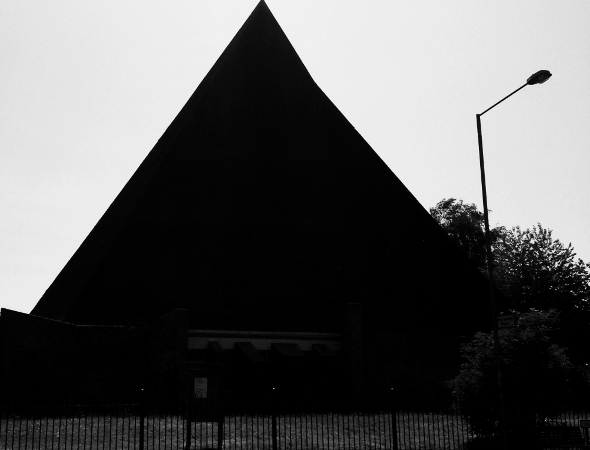