If you live in London you no doubt will have heard of Streets Of Beige, the roving but largely East London-based event that’s been booking a broad range of electronic music since 2010 – Fred P, Blondes, Andy Stott, Ron Morelli, Tessela, Machinedrum and more have all been billed for a Streets Of Beige party since its foundation. With over 50 events behind them, two of the Streets Of Beige founders have signalled their intentions to enter the world of vinyl-only record label ownership with the launch of the curiously named Lobster Theremin. Arriving with a mission statement to provide a platform “for new and emerging international artists of a tougher aural leaning,” the debut Lobster Theremin release is due out at the end of the month and introduces the production talents of label co-founder Palms Trax.

Currently based in Berlin, Palms Trax is described as having “a knack for raw, valve-heated, dust-treated productions shot through with melodic synths and smooth, undulating drum patterns.” His original productions on the forthcoming Equation EP are emboldened by a remix from Willie Burns, the acerbic head of WT Records whose output on The Trilogy Tapes, L.I.E.S., Créme and more have made him something of a cult producer. Further releases on the label are planned from the equally unheralded Snow Bone, whose sonic approach is described as a lot tougher than the Chicago and Detroit-indebted sounds of Palms Trax. To gain a better understanding of the label’s intentions we got in touch with Lobster Theremin’s founder Jimmy Asquith to answer a few questions.

What made you decide to start Lobster Theremin?

I’ve toyed with starting a label for a fair while now, but it never seemed like the right time to launch something. I suppose the musical environment had to be right to get it off the ground and I had to feel that personally I was in a position to commit to it fully. The real spark came when Jay (Palms Trax and Streets of Beige resident) sent over the track “Equation”. He’d been producing for a few years, and steadily his productions had segued into a more US-leaning house sound. This track was essentially the breaking point and he’d managed to bust through a barrier to making something that was a really exceptional production. We were pretty drunk at my house up in Tottenham, where I lived at the time, and that’s where I said I was going to put it out. I’m not quite sure he believed me though!

It’s quite a distinctive name, where does it derive from?

Myself and Si from Deep Space Orchestra were having a natter on Facebook chat ahead of him coming to play my night in London. He was talking about leaving my credit card with the hotel so he could order lobster thermidor. This then got twisted into the term “lobster theremin” and I jokingly suggested either the guys make a song or I start a label with that name.

Aside from the name, what do you think sets you apart as a label?

I’m hoping what will set us apart is the true artistic quality of each release. House and techno can be subdivided and represented through so many different permutations and my feeling is that each one we explore will be of such a high standard that it’s difficult for people not to return time and again. I want people to be able to come back to the label and pick up a release with a different mood, character and of a different genre, but one that still completely blows them away. Most people’s bags are full of a spectrum of 4/4 electronic music and it’s my goal to be able to fill a good section of that with our output.

I think the main surprise will be how many new and debuting artists there will be on the label. There’s a ton of new talent coming through and I think it’s key to push people who clearly have the ability to go very far.

I’m also keen to really push and promote the label, as opposed to keeping it too low key. There is enough shoddy house music being fed to people at the moment and I really think that the vinyl community need to start promoting themselves better to show people how it’s really done and that ten-a-penny handbag house isn’t the only way.

Can you tell us a bit more about Palms Trax, the artist involved on your debut release?

I’ve known Jay since 2010, where I booked him to play the fourth ever Streets Of Beige supporting Airhead and Lapalux. He smashed it and was still quite young and plucky then haha! After that I got him along to support Fred P and to play a few other nights, his taste was notably morphing into more of an analogue house and techno sound. He also started interning at Phonica and from there he was pretty much on another level in terms of his exposure to the edge-of-the-edge vinyl stuff.

Willie Burns is a smart choice for remixer, whose decision was that?

Jay suggested it initially, and for me it was a straight goer. William’s work constantly surprises and I think he has this really playful, dark and melancholic mood dynamic that constantly shifts across his songs and EPs. “Waste Your Time” and “Another Night” are two of my favourite tracks ever committed to wax, and I was pleased that he rolled back the years for a proper vintage beat-down remix on this EP.

Are there any specific labels that have influenced how you are approaching Lobster Theremin?

Quite a few to be honest. From people with 30+ releases to those with just a few. L.I.E.S. is a fairly obvious one, but I feel that’s more of a connection with the policy of pushing new talent. I’m a huge fan of Smallville and their knack for visual playfulness as well as putting out music that’s not just fresh, but beautifully crafted in terms of the sonic quality. Deep house doesn’t come much smoother! I love the shifting identity that Kann records have, with their wildly different artwork and an individual feel to each release. The same goes for Antinote, and it took me several releases to really connect the dots as they are all so different. Workshop deserve a mention for their consistently unique output, and Drumpoet Community for originally showing me a different perspective on deep house through their Drumpoems 1 compilation.

Can you offer us a hint at what else to expect from Lobster Theremin over the coming months?

The second release from London-based Snow Bone is almost ready to go to mastering. There are tracks floating around in mixes and this one is certainly much darker than the debut. It’s got a rough and raw techno feel with some quite evil dark-wave influence, especially on “SHO 5537”. Further on from that I’ve got up to about 6 or 7 releases planned out, and really I’m quite certain about what I’d like to release up to number 10. A couple of them will be more white label affairs and some smaller runs too. I don’t want to wait around with these. Most labels have a slow start but I’m keen to hit the ground running and be getting one a month out through 2014. Obviously a bit ambitious but I’m confident that once we’ve got the first few out we’ll be rolling.

Lobster Theremin will release the Equation EP by Palms Trax in 12″ format only on September 30 – you can pre-order here. 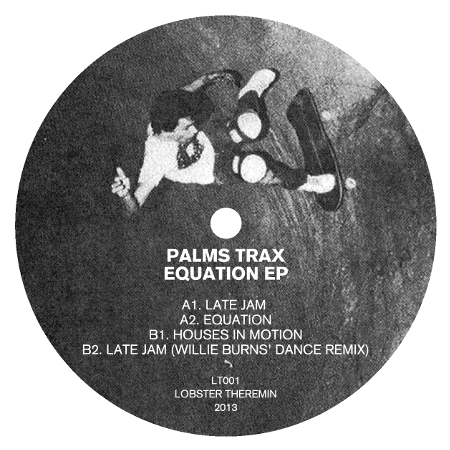 A1. Late Jam
A2. Equation
B1. Houses In Motion
B2. Late Jam (Willie Burns’ DANCE Remix)