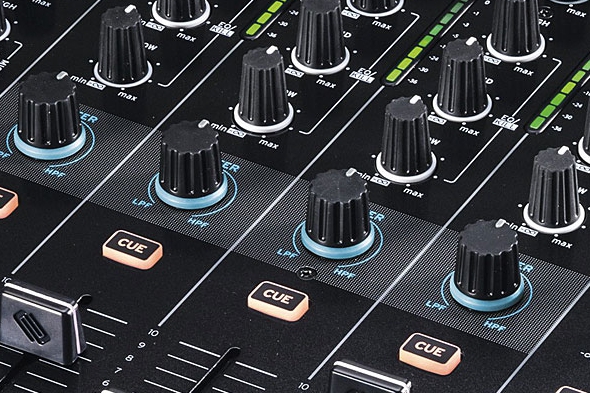 Reloop up their game and step into the pro arena with their latest four channel DJ mixer. Rob Lee finds out how their RMX-80 performs.

Although they are no newcomers to the DJ hardware business, with a series of CD decks and the RMX-40 mixer to their name it’s perhaps with their DJ controllers that the Reloop name has seeped into the collective DJ consciousness in recent years, becoming well known for creating affordable hardware that stresses functionality for beginners and keen amateurs. However, their brand new four channel RMX-80 digital DJ mixer has been designed with a broader audience in mind.

The first thing that you notice whilst unboxing the mixer is the sturdy build quality with only the source selection switches not quite living up to the quality of the other control surfaces. Each of the four programme channels is set up exactly how any DJ would expect to find them, with a source selection at the top (channels 2 & 3 phono and CD with channels 1 & 4 CD and line), gain knob, three band EQ, a dedicated bi polar lo/hi pass filter per channel and a headphone cue control with 12 segment LED gain displays, finished off with faders that feature adjustable curve control as well as fader start options. The cross fader is also adjustable and has the fader start possibilities, and for DJs that are both club style mixers and scratch performers, it is possible to switch out the built in cross fader for an Inno fader with minimal difficulty. In addition it is possible to switch the three band EQ between full kill mode or classic +12/-26db mode by way of a switch on the front panel, thus adding to the mixers overall flexibility. Mobile DJs will appreciate the dual microphone inputs and auxiliary sound source control with talk over functionality and the addition of a second 3.5mm headphone socket on the front side is a welcome convenience. 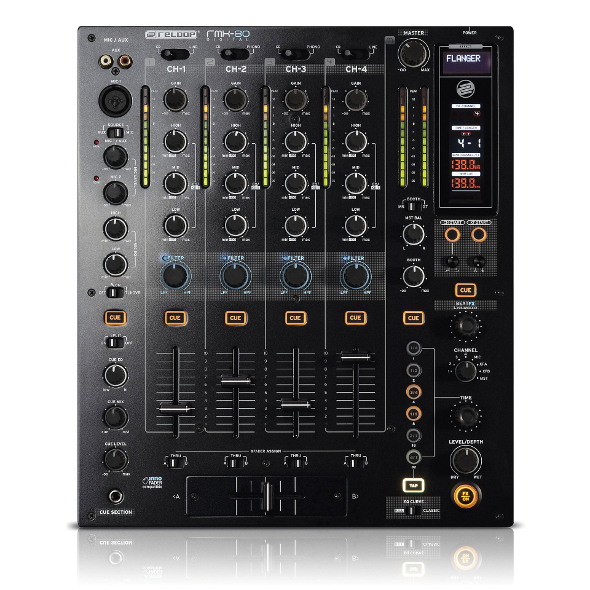 Some of the more exciting and innovative design features on the RMX-80 can be found in its built-in FX unit, which features 12 professional-sounding DJ effects as well as a send and return control. Here you can find all of the flangers, delays, echo effects, and gates that you would expect to find as well as loop roll, roll reverse, transform and a noise generator amongst others. The FX selection is achieved using the beat FX push encoder that allows you to scroll through the effects before pushing to select. The backlit FX on button at the bottom of the unit enables the effect in conjunction with the level/depth knob that determines the amount of effect to dry signal coming through the master output. You can assign effects to any of the four programme channels, mic, cross fade A side or B side as well as the master output. Two independent beat counters calculate the BPM of your music but for further control there is a tap tempo button and a time control knob for detailed control over the timing and length over which FX operate or, if you prefer, there are six buttons that sub divide time from quarter notes (semi quavers) to four beats (or one bar).

“For the professional or semi-professional DJ who is looking for something more competitively priced, this could be a suitable alternative.”

This isn’t their only function, as they also behave as re-trigger buttons when in loop roll and reverse roll modes. The loop modes use the unit’s internal buffer to store the loop and will continue to play until you turn the effect off. Used in conjunction with the dedicated channel filter it is possible to create convincing build up sections or provide a more appropriate sound base for beat matching depending on the style of music you are playing. The noise effect also features an LFO generated white noise sound that can be freely assigned to any channel for added control; you can manipulate the frequency of the LFO modulation and hold a particular cut off frequency using the quarter note time button and then use the channel filter to perform controlled sweeps. It should be noted that it’s not possible to use the EQ with the FX section, however, it is possible to get a varied sound using the built-in filter.

The other major innovation to the Reloop mixer family comes with the setup utility that is accessed by holding down the channel fade and cross fade start buttons simultaneously whilst turning the mixer on. The beat FX encoder then becomes the navigation and selection tool that allows you to customise the settings of the mixer to best suit the environment that it’s being used in. Master output can be toggled between mono and stereo, the built in limiter can be set to up to -12db, cue mixing can be set to monitor multiple channels through the headphone cue system or simply one at a time. In addition, the level of volume reduction when using a microphone in talk-over mode can be adjusted. One of the more detailed controls is the isolator cross over control which allows you to set which frequency range the three bands of EQ operate within. If the venue you are in has multiple rooms/zones/outside or a back bar then its possible to assign a single programme channel to the booth output allowing you to play, for example, a more downtempo playlist and control its volume through the booth control, making the RMX-80 a fairly flexible device for a variety of different environments. 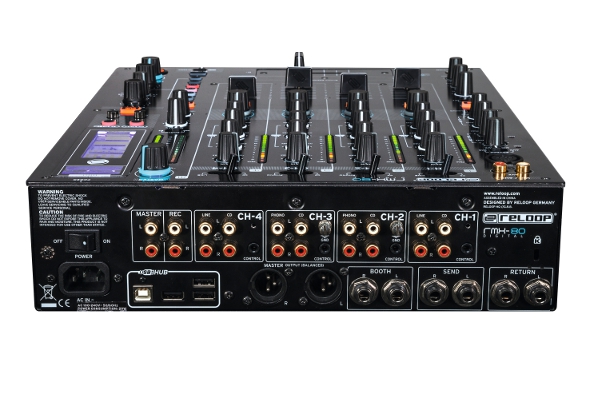 The RMX-80 has a marginally more affordable price tag than its competition, which primarily comes in the imposing form of the Pioneer DJM750. The Pioneer machine features both soundcard technology and MIDI capability, whilst the Reloop RMX-80 has neither, and if there is a weakness in Reloop’s offering, this is where it lies. Setup changeover between laptop-based DJs and traditional DJs are still a constant source of mutual aggravation, and Reloop’s lack of an audio interface would certainly not ease the situation. If you are a DJ looking to cut down the amount of MIDI controllers you are carrying then you are also out of luck here. Despite the exclusion of MIDI implementation, there is a useful USB hub built in that allows three devices to be connected to your laptop at any one time, and this goes some way in addressing the needs of the laptop DJ. Despite the absence of a built-in sound card and MIDI control, in terms of basic features, the Reloop RMX-80 might just have the edge over its rival; although both units have thirteen assignable FX, the RMX-80 has slightly better tactile control over the Pioneer machine.

Overall, the Reloop RMX-80 is a flexible mixer, with great sound and plenty of volume that works well for both club DJs and scratch performers in a variety of different club and bar environments. Although this mixer is unlikely to replace its chief competitor as the industry standard four channel unit, it certainly has an impressive array of features and innovations, and for the professional or semi-professional DJ who is looking for something more competitively priced, this could be a suitable alternative.