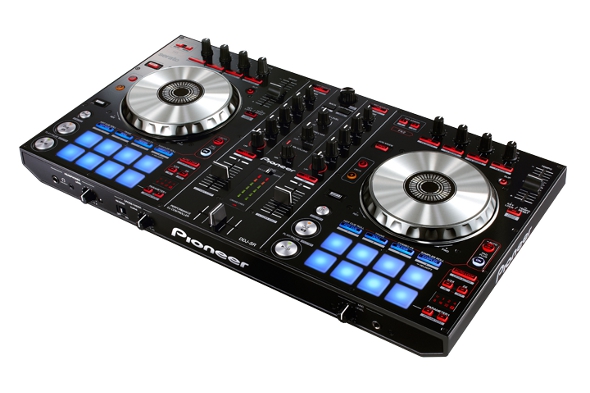 The mid range controller is a two-channel version of the four-channel DDJ-SX controller for the Serato DJ software.

Released last November, Pioneer’s DDJ-SX controller was the first controller designed specifically for use with the Serato DJ software, offering four channels with external inputs for use as a standalone mixer, jog wheels and performance pads for utilising the software’s cue, roll and sample features. Now, following in the wake of the announcement of their new DJM-900SRT mixer and DJ-SP1 controller, Pioneer have revealed a slimmed down version of the DDJ-SX controller.

Featuring only two channels instead of four, the new DDJ-SR also maintains most of the same controls, including the “Big Jog” wheels for high scratch response and 16 velocity-sensitive performance pads; although the mixer is two channel, the controller still offers control over Serato DJ’s four decks. The DDJ-SR does have one key feature unique to the new controller in the form of the new Pad Plus function; by hitting the Pad Plus button, the performance pads can be used to access a secondary set of features, including hot cues and samples that are automatically synced to the BPM, “Combo FX”, which can trigger and modulate multiple effects and filters with one pad, and “Trans Pad”, which cuts the volume of effects in and out at pre-set intervals.

The controller’s features are outlined in the video below; full details can be found at the Pioneer website.

Pioneer will release the DDJ-SR in November, priced at £499.