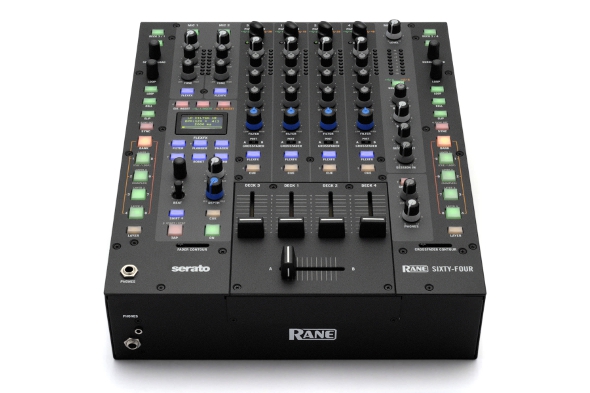 The new mixer comes with a host of features designed for use with the Serato DJ software.

Coming in the wake of the news that Serato will no longer be supporting their Scratch Live software with a mind to focussing their efforts on Serato DJ, and the announcement of new Serato DJ-focused hardware from Pioneer, Rane have revealed their own mixer offering in the shape of the Sixty-Four.

The Sixty-Four is essentially the same mixer as Rane’s Sixty-Eight, featuring two USB ports for easy switchovers and back to back performance and a multitude of built in controls, albeit with a few changes to make it more Serato DJ-focused than its Scratch Live-centric predecessor. As well as improved hardware effects, the ability to send separate MIDI messages to each USB port and specific support for Serato NoiseMap’s Vinyl and CD control in Serato DJ, the built-in controls now come tweaked for Serato DJ’s specific features, including Library, Cues, Loops, SP-6, Sync, Slip Mode and more.

Rane will release the Sixty-Four in October.