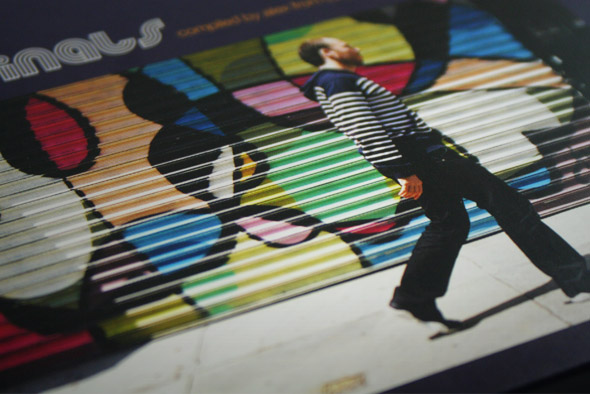 All good things come to an end. Some five years after Claremont 56 conceived and inaugurated the Originals compilation with a selection from Moonboots and Balearic Mike, the series has slowly crept towards its intended conclusion of ten editions with progress occasionally blighted by licensing problems, yet blessed by the hands that curated them. Mark Seven and the Rong Music crew have been amongst personal highlights of the series which now reaches the end of its CD-shaped lifespan, though a vinyl box set featuring two tracks from each edition is due for release soon.

Overseen by Alex From Tokyo, the concluding Originals is another wonderfully enlightening selection from a man whose DJ name immediately conjures up a sense of Balearic chic. As with previous contributors, the man born as Alex Prat carries a certain level of cachet as a collector and DJ that makes him perfect for the Originals series, and a little bit of digging beneath the internet’s surface reveals he’s had quite the fascinating and glamorous life. Those stuck in mundane office jobs might not want to read about someone who was born in Paris, spent some twenty years in Tokyo forging various cultural links between Japan and the West and now calls New York his home, so let’s move on to Prat’s selection.

It retains the wilfully broad approach adopted by previous selectors in the series, with Prat paying his dues to the original Balearic ethos with thirteen tracks that languidly glide through various genres and generations of music. Much like previous editions, Prat’s digging skills mean you’re invariably making mental notes to explore this selection of mostly lesser known artists at a later stage, which is surely the sign of a great compilation. The programming here is impeccable too, with the thirteen tracks complementing each other in some form (be it mood, tempo or sound) giving Originals 10 an excellent sense of pace.

The tone is set perfectly by the opening selection, I:Cube’s wonderfully relaxing “Procession” which has only previously appeared in a 2007 Chateau Flight podcast for RA, and has remained locked in the Versatile archives ever since (Nicholas Chaix completists will no doubt be glad to hear this track has been plucked to feature on the forthcoming Originals vinyl box set). The spazzed out library disco funk from Claude Larson’s induction into Sonoton’s early ’80s series of A Musical Wildlife albums follows; the track’s weaving eight minutes of movements pulling you into a zone which is broken up nicely by the insouciant “Meli-Fali” from Japanese trio Pepe California; edited here by Prat and Isao Kumano under their Tokyo Black Star name.

Indeed, as the compilation progresses you really get the feeling at times Prat’s trying to convey to some degree his musical education whilst growing up in Tokyo with several inclusions originating from Japan. Max Romeo’s “Rise Up” and “Sunset” by Violets are revelatory in particular. The former is lifted from Romeo’s 1984 LP I Love My Music released on the Japanese label Wooreal Records; the fragile dubbed out disco beat of “Rise Up” is a world away from Romeo’s iconic “Chase The Devil” and made this writer want to investigate the album further. “Sunsets” meanwhile is a slice of classic mid 90s jazzy deep house, rich in musicality and driven by finger snaps (a personal favourite) and the one production Katsumi Hidano made under the Violets name. Originating from a compilation itself (1994’s 2xLP Listen Up) it’s clear Prat is well versed in the educational purposes of a good ‘Various Artists’ release.

A further example of Prat’s own edit prowess also features in the form of the 2007 ‘Big Bang Re-Edit’ he did of The DIT with Kentaro Kataoka. In their hands, “Let’s Start Dancing” is one of the tracks featured here that will immediately resonate with DJs and is a considered highlight of this compilation. A wonderful left turn into synth pop and punk funk follows with some prize material from the daunting Bill Laswell archives standing out before Prat veers back into disco territory, ending with the wholly unique Guy Cuevas. The end of a (small) era this may be, but the Originals series has left a legacy we can all return to and enjoy.