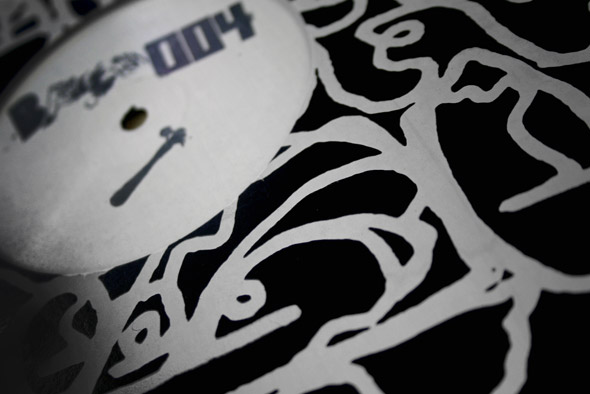 The Bangers & Ash series from Styles Upon Styles has the potential to become a really enduring label project; one side of strung-out Ash, and another of floor-facing Bangers. The results have been consistently impressive, a highlight amongst which is Zach Cooper’s recent contribution as kuxxan SUUM and King Garbage, in which he offsets his own hypomanic rave tendencies against the neo-soul sauntering of his interstate collaboration with Victor DiMotsis.

The fourth effort in the series, from Kevin Palmer, better known as Best Available Technology, bears comparison with Cooper’s release both in content and quality. Where King Garbage looked askance at soul, BASH004’s Ash tracks are a lopsided impression of the West Coast’s more lysergic hip-hop experiments. The tracks on the A side form a triptych, of which opener “Bulldozer Rituals” and third track “Venom, Pheromone, and Phosphorous” (the conspicuous Oxford comma in the title of which is laudable in its own right) comprise two opposing and complementary ends.

“Bulldozer Rituals” lollops around two contrapuntal sirens, elongated to the point where you can hear the threads with which the sounds are stitched ready to snap. They are almost human: bodiless wails stringing together a subaqueous boom-bap, while Tinkerbell chimes float ominously in the middle ground. On “Venom, Pheromone, and Phosphorous” those chimes take centre stage, but here they are grotesquely disfigured, floating like oil through smokey water.

This disquieting pair is bisected by “Vulgar Geometry”, in which the breathing of some unspeakable thing bounces off metallic surfaces, forming a louring backdrop to a rhythm section that sounds like someone attacking an oil drum with a fire extinguisher. In aggregate the Ash side harks back to Dabrye’s excellent Two/Three, but here the distension of hip-hop is taken to an even more unnatural degree. The tracks are more than sufficient as presented, but it is easy to long for a vocal version. Listen back to Dabrye’s phenomenal “Encoded Flow” and pray for a BAT-Kadence hookup.

The Bangers side, meanwhile, takes a similar palette and puts it in the service of techno. “Contrecoup” pits swooping bass notes, recalling “Bulldozer Rituals”’ warped sirens, against flustered percussion. Metronomes rattle around in glass, while woodblock-like synths fall over themselves in an endless mirror of delay. “Tide Tunnels”, though, has the real shot-to-the arm efficiency, emerging from nowhere in a fug of murky pads before the haze abruptly clears midway through, only to gradually seep back in from the periphery. Here Palmer is at his most focused, winding a small clutch of elements around a kick seems to thud, click, and exhale all at the same time.

Perhaps ironically, given the dual nature of the release, BASH004 sees Best Available Technology demonstrating a really singular purpose. Even when they are swathed in murk, both sides tilt relentlessly forward. There is a kineticism here that embosses it against his previous (excellent) work, rendering it a highlight both for Palmer and for the series.

Ash:
A1. Bulldozer Rituals
A2. Vulgar Geometry
A3. Venom, Pheromone, and Phosphorus

B1. Contrecoup
B2. Tide Tunnels