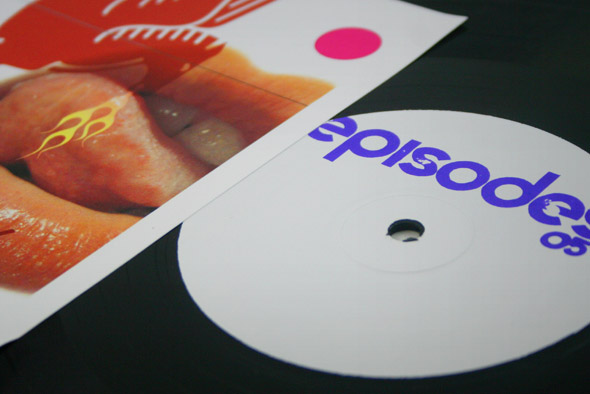 For lovers of rugged machine music, there is a hive of activity bustling around Chicago at present between likeminded souls Chicago Skyway, Hakim Murphy and Ike Release. Both individually and in various configurations of collaboration, they seem to have tapped into a creative spring that is sustaining them on a healthy torrent of box jams that bounce off of the analogue revival to deliver tracks both inventive and unfussy in the same breath. Hakim Murphy and Ike Release’s Innerspace Halflife project has been well received already, and now it’s Murphy and Sean ‘Skyway’ Hernandez linking up on Release’s Episodes label to serve up more of that back-to-basics beatdown business.

Proceedings begin with the twitchy lurch of “Candy Mountain”, characterised by an off-kilter taste in synths that starts with a woozy tone fumbling blindly in the dark to find a consistent melodic refrain to call its own. As the track takes hold and some acid trickles in for some clarity, a more focused but equally warbling chord sequence swells in, only to be scuppered by a higher register string-like hook that brings back the disorientation of the start of the track. While all this delirious action is taking place, the beat is fighting its own battle, popping off in a swung groove but with half the hits taken out. With this kind of rhythm section, it feels as though the whole track should buckle into chaos at any given moment, but in the instinctive rough and tumble of the hands at the machines it pulls through in fine, albeit wayward, style.

Conversely, “Yum Yum” is far more anchored from the start, a delicate drum machine arrangement leading into soothing chord tones that promise a warm and inviting destination. Indeed, as the track settles into its groove and subtle atonal string embellishments drift in and out, the mysterious atmosphere given off calls to mind the work of Repeat Orchestra and Further Details, and the Real Soon label on the whole. Striking the balance between plaintive soul and techno ambiguity can be a tricky act, but achievements such as these make for some of the most effective pathways through the concept of deep house.

On the flip side, “Doorbell Action” welcomes back a more energetic kind of Pegasus Heat, although in comparison to “Candy Mountain” there is a great deal more control going on here. The beat is a strong, swinging beast of harsh claps, simmering hats and staggered kicks, all driving the impulsive switches between stark chord riffs and 303 grind-outs. The drums never give up through the duration of the track, making for a more dependable jam in the mix, but the synth elements are afforded freedom to roam as they please, whether into each other or flying solo.

Solidifying the convivial atmosphere the concerned artists are operating in, Ike Release turns in a remix of “Yum Yum” that feeds those delicate tones a production protein shake. The drums come bowling out with popping sinews and palpable urgency, while the fuzzy chords have playmates to tussle with in the form of meandering filters and additional acidic flecks. It’s a remix that is wholly respectful to the source, while still doing enough to be a resolutely worthwhile addition to the release.

The fact that the remix fits so well with Hernandez and Murphy’s original material only goes to confirm that between the three of them, a shared creative vision has been formed which should go on to serve them well. Perhaps it reflects the micro-scenic nature of electronic music today, but while the mutual inspiration can keep fuelling ideas and development, who’s to complain?