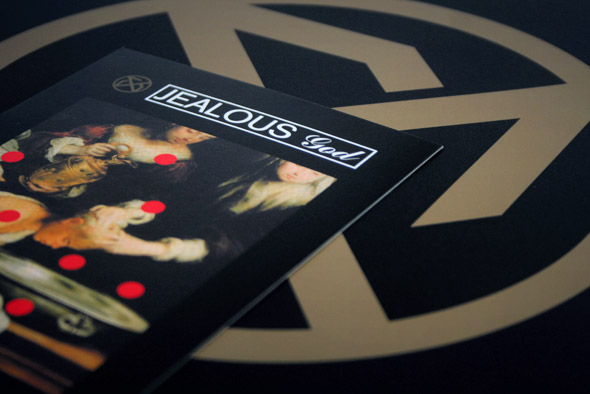 It’ll never be as good as it used to. That’s the argument often advanced when an electronic music artist or organiser tries to do something new. In the case of Jealous God, the new label from Regis and Silent Servant, this claim could have more resonance than is usually the case. After all, Jealous God is brought to you by two-thirds of the collective behind Sandwell District, the label that defined techno for over half a decade.

In short, Jealous God has a lot to live up to. It also doesn’t feature the involvement (yet) of Function, the producer behind some of Sandwell’s best records – Isolation and Anticipation. It’s not hard to imagine Sandwell District obsessives the world over tut-tutting about the fact that James Ruskin is ensconced as the third person behind the label rather than Dave Sumner. Of course, such criticism is misplaced; as the first Jealous God release showed, this label, unlike Sandwell District, is up for allowing ‘outsiders’ in. Ruskin also has a formidable pedigree; the brains behind the long-running Blueprint label, which has recently championed new talent like Lakker; Regis’ partner in the chain-mail rhythms of OVR and the author of the bone-crushingly dark album Into Submission.

The UK producer also shies away from a full-on dance floor approach on this release. “What Falls To The Ground” and “The Nature Of Our Hurting” feature dry broken beats and precise percussive swathes supporting droning bass and eerie, atmospheric synth textures. Even the most full-on track, “Into A Circle”, moves from robust tribal drums into lithe broken beats, progressing via a menacing chord sequence that has echoes of the central riff in Literon’s ‘Machines’.

But it’s not the dance floor material that impresses so much on this second installment, rather the beatless tracks that Ruskin creates. “Excerpt 3” is a serene synth passage. It’s a wonderful accompaniment to the majestic “Excerpt 1”, where an organ so sombre and atmospheric finally gives way to copter blade rhythms slicing through the ambience. Then there’s “Excerpt 2”, a chilling synth arrangement with funereal vocals. Like a method actor, is Ruskin really getting inside the role, listening to Gregorian monks and praying in grey granite churches in his spare time? No matter what the explanation for his approach, it sounds like the second Jealous God record has drawn on divine inspiration.