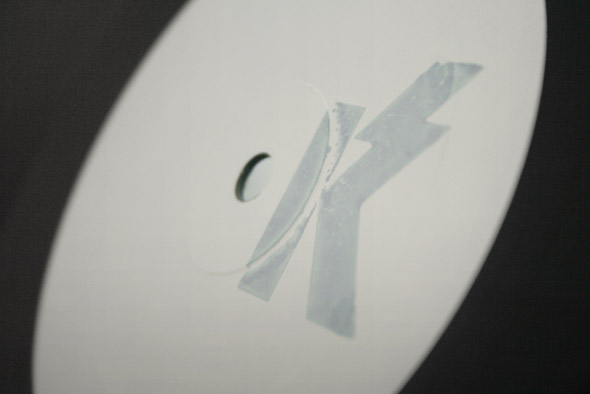 There has been a swirl of interest around Frak since they emerged from the shadows of the Scandinavian scene with no less than 27 years experience of leftfield analogue sonics behind them. The trio of Jan Svensson, Johan Sturesson and Björn Isgren have been plying their trade since the late 1980s with varying levels of intensity, moving through blistering techno, bumping Djax-Up-Beats style shuffle, and now settling into a more tempered kind of acid that comes full circle to the sound they were first delving into at the tender age of 13.

While the large part of their life in music has been isolated in their native Sweden and the fringes of the electronic music world, a few opportune releases have shared their staggering discography and wayward style with the world. Kontra Musik is undoubtedly one of the labels instrumental in helping with this awareness, alongside a choice Sex Tags Mania single and an appearance on a Workshop split disc.

After their notable trilogy of Kontra releases, they return to the label for another four burners of machine madness like momma used to make, and in doing so they provide to the uninitiated a perfect snapshot of what Frak is about, while for the already clued up there’s yet more of that tireless lysergic funk. The A side takes in a slower tempo, kicking off with the stalking tumble of “Raw Space”. It’s the synth decorations that make this track, from rubbery swells to vaporous blasts that come over all alien while a solid battery of drums roll into a drunken ballet

“Kom Deluxe” is more primal, fed on a healthy diet of strafing bass pulses and acid twittering with ample room left in the mix for the decidedly straight drum track. The track highlights the classic straight-to-tape ethic which Frak have engaged with since it was simply the most effective recording method rather than an aesthetic choice, jamming out the few key elements with a minimum of fuss rather than crafting dramatic junctures in the music.

On the B side, the tempo ramps up and Frak begin to nod a little more to their rave past as a fearsome arpeggio kicks off “Fragmentus” in earnest. It’s still nowhere near the aggression of their 90s output, but it certainly makes for one of the more feisty tracks they’ve dropped in recent times. As with all great acid throw downs the central synth line remains a constant throughout, simply tweaked as the oscillators change their tone, but there’s extra psychedelic meat to be enjoyed in the shapeless hisses that come swirling in at appropriate points to enhance the intensity of the track.

Compared to the somewhat murky tone of the EP (not an unusual atmosphere with Frak’s music) the clarion call of “Acid Colour” comes as a shock, not least as the synth that heralds the start tolls out as the namesake of the tune. Live tweaking ensures it doesn’t stay crystalline for long, but it does make some welcome returns at opportune moments, ringing out with kind of bold resonance that you can find in John Heckle’s music.

There’s a simplicity to everything that Frak do, undoubtedly coming from their tried and tested approach and a lack of pretension. There are no lofty intentions to toy with emotions or make statements with their music – instead their productions sound like they come out of an instinctive interaction between them and their chosen tools. When there is a need for fist shaking drums and face-screwing synth lines with no strings attached, Frak are your guys.