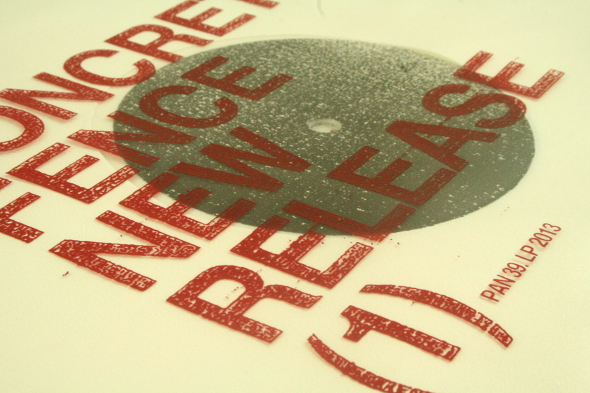 With Karl O’Connor and Russell Haswell joining forces as Concrete Fence to author the latest record on PAN, it’s fair to say that New Release (1) carries with it the legacy of two decades of electronic music experimentation. It could so easily have turned into sonic one-upmanship, but thankfully both parties have brought their expertise and experience to a release that while hardly accessible may nonetheless attract the attention of the casual listener.

“Industrial Disease” starts off by getting sucked into a white noise vortex; it could be the sound of the universe speeding up as Hal plots a course away from mankind in 2001: A Space Odyssey or just some white noise feedback as Haswell messes with a studio mic, but whatever about its provenance, it provides an intro for a searing, overbearing bass and subtle, metallic off beats. Constantly moving and morphing, the beats drop off and cut to the noisy bass that is dissected, dislocated and folded in on itself, eventually descending into a wall of noise. Abstract sound also kick-starts “Caulk”, but in this instance its sombre soundscapes. The arrival of chain-metal percussion hints at a groove, but soon enough afterwards, O’Connor and Haswell steer the track towards frequency-shifting drones and, like “Industrial Disease”, end with a white noise outro.

Of all the tracks, “The Unabridged Truth” is the most conventional. It features understated beats and a bassline that could have originated from James Pennington’s studio but has since been processed and subverted to such a degree that while still ominous is a universe away from the original.Just as the arrangement begins to pick up steam however, the duo’s love of the abstract kicks back in. It starts with a break down full of glitchy sounds and foreboding, tones before the last two minutes of the arrangement are occupied by a cacophony of mini-explosions and alien voices.

Haswell and O’Connor have made a virtue of experimentation throughout their solo releases. That they are able to work together and on New Release (1) present largely abstract music in a manner that will appeal to the curious techno fan is hugely impressive.

A1. Industrial Disease
A2. Caulk
B1. The Unabridged Truth