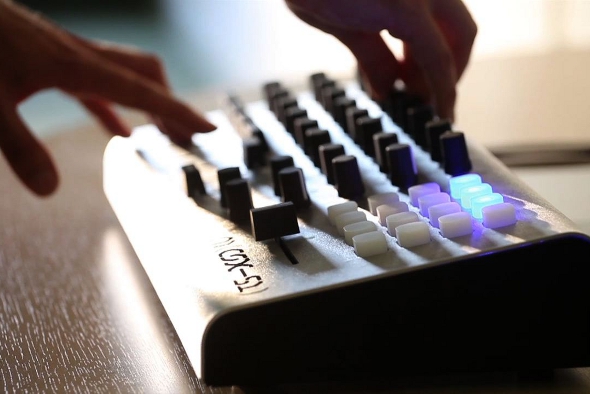 Two members of the Sheffield techno trio have started a Kickstarter campaign to finance the production of their new self-designed MIDI controller.

The Black Dog might be best known for their productions on Warp, Dust Science, Soma, and most recently Ostgut Ton’s Unterton imprint, but it seems that two of their members are also looking to enter the hardware market. Richard and Martin Dust have recently started the Machinewerks brand under which they hope to release their CS X51 controller. Although they may not seem the most likely candidates for such an endeavour, the pair have previous experience in designing and programming, while the third member of their team has engineering experience.

Supposedly born out of a frustration at not being able to find a MIDI controller that was big or light enough, or had enough controls, the CS X51 features 28 potentiometer rotaries, seven 45mm potentiometer sliders and 16 blue LED buttons in a 4×4 matrix, all of which are fully assignable and encased in an aluminium body. The unit also features USB and 5 pin DIN MIDI in & out for full bi-directional MIDI support, while a 9v power connection also allows for computer free setups. Although it has fully programmable MIDI mapping to any hardware or computer, it works out the box Ableton, Traktor, Reason, Cubase, Logic and any other programmable DAW.

Intriguingly, Machinewerks have opted to go down the crowdfunding route to manufacture the CS X51, starting a Kickstarter campaign with an ambitious target of £27,000 in the hopes of getting the unit realised. Investment levels go from £2 up to £320, with a £275 investment ensuring one of the first 100 units to be produced. Although it’s still in the prototype stages, Machinewerks are hoping to have the CS X51 available in early 2014; those wishing to support the campaign can do so here, while the unit’s capabilities are outlined in the video below.