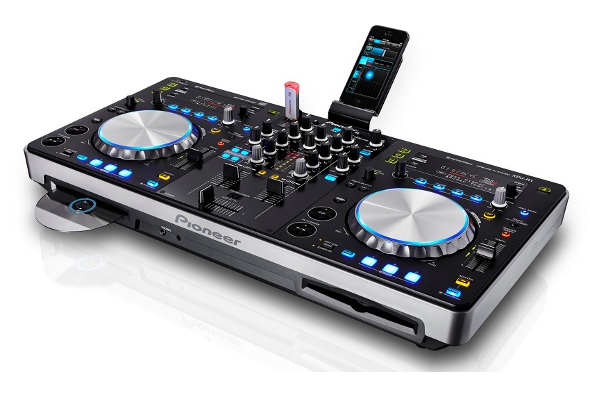 Pioneer have been at the top of the tree in terms of DJ equipment for a while now; thanks to their innovative CDJ multi media players and smart, intuitive DJM mixers, they have been the brand of choice for professional DJs and the standard issue DJ equipment in most clubs for over a decade. However, those with more mobile DJ needs may be in need of a simpler setup with fewer connections in a single unit, with USB and CD capabilities and built in mixer as well as looping, hot cues and effects. Until now such units have been hard to come by, but Pioneer’s new XDJ-R1 fills a gap in the marketplace you probably didn’t know existed until now, fitting somewhere between digital DJ controller and mobile all-in-one CDJ solution; with two front loading CD players a built in two channel mixer, a USB port for playing music from storage devices, and phono/line inputs for integrating your vinyl turntables, it would be safe to say that this is as fully featured a single unit workstation for DJs yet produced.

The central mixer console contains two source selectors at the top for switching between the digital CD/USB deck and phono/line input, separated by a curious WLAN indicator light in the middle (more on that later). Gain controls are underscored with three band EQ that features full kill across all frequencies. Also included on this model are the well known Pioneer sound colour FX, which include filter, crush, pitch and noise effects that are controlled by a single knob on each channel, sweeping low to high. Each channel has backlit headphone cue buttons with programme faders and a cross fader with curve control, and sitting in the middle of the console is a seven segment LED that indicates gain levels for each programme channel and the master output all at once. With dedicated master and booth level control, as well as headphone cue/master and volume knobs, the two channel mixer section covers all the basic operations you would expect from any of the DJM series mixers, with the added benefit of Pioneer’s sound colour FX. 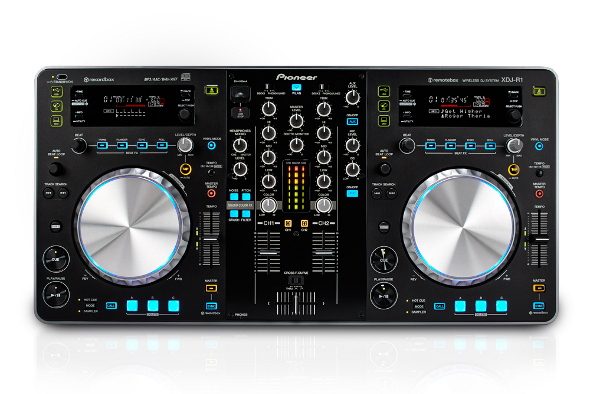 The decks themselves have a sizeable jog wheel, and although it isn’t the type found on more advanced Pioneer decks such as the CDJ-850, it does have touch sensitivity and a vinyl mode for scratch DJs. There is a large display on each side that gives invaluable feedback regarding time remaining/elapsed, as well as a BPM counter and track title. There are various controls for navigating the display including a push encoder for selecting tracks from USB storage devices and also for navigating some of the more advanced settings, including the WLAN network settings for controlling the unit wirelessly. As is standard with Pioneer CD decks, there is a notched pitch fader with adjustable width control and master tempo which locks the key of your music, while a push encoder is provided for implementing auto-loop. The three cue buttons double as samplers, using the shift button to access this secondary function. These basic operations work very well, and are in line with all of Pioneer’s professional decks but the most unique aspect of the is that the whole operation can be controlled wirelessly using the brand new remotebox app.

The remotebox app is free to download and use with the iPad, iPhone, iPod touch and Android devices. The wireless control allows you to browse your USB device, load onto a deck, sync your music, use all the looping and cueing features, FX, EQ, trim and faders without having to be next to the unit itself. Some people will probably be wondering if it is possible to hijack control of the decks by someone using a similar device with the remotebox software installed. The answer, thankfully, is in the negative; once a device is wirelessly linked to the unit, it’s not possible for another unit to connect. Further to this, in setting up the wireless control, it is possible to programme a password for further protection.

Once the device is connected to the unit via WiFi, a whole new world of possibilities is opened up. If your USB storage device has been prepared using Pioneer’s rekordbox music management software, it’s possible to sync each side of the XDJ-R1, thus easing beat matching duties. Of course, unless you have wireless headphones, beat mixing is going to be difficult without the sync feature enabled. Perhaps more enjoyable is the wireless effects control which unifies both the beat FX and the sound colour FX on an XY style pad; in fact, there is no practical part of the unit that can’t be controlled wirelessly, including headphone cueing, EQ and mic control, and the connection works surprisingly well, and over a fair distance. Of course, if you are using a smaller device such as an iPhone, it is going to be trickier to get detailed control of the unit meaning that a larger device such as an iPad would perhaps be more suitable if you are planning to make extensive use of this feature. Pioneer have supplied a stand for smart phones that attaches to the back of the mixer; this kind of set up could be useful if you prefer browsing music on your phone, and also allows you to use the XY type effects control whilst still having the tactile controls of the mixer in easy reach.

There is little doubt that there are going to be a lot of club DJs scratching their heads and wondering why they would need wireless control of the DJ console but this unit is very much aimed at mobile DJs who need simple and versatile equipment that is quick to set up and has a few event essentials such as a mic and auxiliary input. It could also be a very useful console for top 40 bars or places where someone has to take care of more than the DJ duties. There are other units that can control DJ software using MIDI wirelessly such as the Numark Orbit or Pioneer’s XDJ Aero system that controls music on mobile devices, and also can work as a stand alone two channel mixer. However, there aren’t any designs that feature CD decks in such a comprehensive, practical, easy to use, all-in-one unit, and in this respect, Pioneer have the market tied up. The XDJ-R1 could well be another part of the Pioneer line that might find its way into venues and bars like its older club siblings.