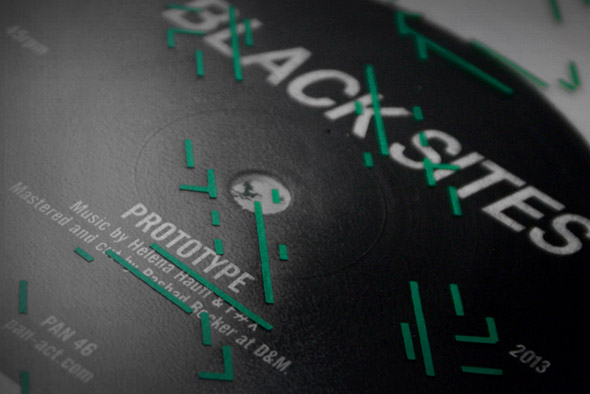 It would seem fair to say that Golden Pudel resident Helena Hauff has aroused a certain degree of suspicion in certain quarters of late thanks to her seemingly meteoric rise from relative obscurity. This is perhaps because talk has focused on her music rather than her undeniable skills as a DJ, and while her solo production debut on Werkdiscs was good, it was perhaps not quite spectacular enough to convince those who hadn’t seen or heard one of her excellent DJ sets or mixes quite what all the fuss was about.

Black Sites is the collaborative project between Hauff and fellow Golden Pudel resident F#X, and their debut release is one that perhaps shows off Hauff’s full potential as a producer. Like Hauff’s solo material, the pair trade in raw, one-take analogue techno, but unlike the muddy variety that is currently threatening to become oversaturated, the Black Sites sound is vivid and shocking, something no doubt due to the F#X’s supposedly more considered method of production. That the duo have Bill Kouligas’ attention and gained a release on PAN perhaps is unsurprising given the propensity of high resolution sounds on his label, though even in the wake of its recent releases this feels significantly more dance floor-focused than any PAN release so far.

The title track is an overwhelming 10 minutes of scuffed kick drums, gnarled 303 and rippling chords which obviously come heavily inspired by Hauff’s beloved Drexciya. Hauff has previously stated that her productions are about trying to recapture some of the energy of her DJ sets, and the overwhelming build-up of thermal energy that threatens to rip “Prototype” apart before it drifts into more inert frequencies is probably about as close as you can get to feeling the sweat dripping from the ceiling of the Pudel.

“N313P” is much more elastic than than its counterpart, but still captures that feeling of being at the centre of a mass of flailing bodies thanks to its whipcrack snares, uneven melody and squealing tones that bounce along like a truck with particularly loose suspension. There might not be anything particularly revolutionary here, that feels unimportant; the Prototype EP is just a shining example of great techno done incredibly well.