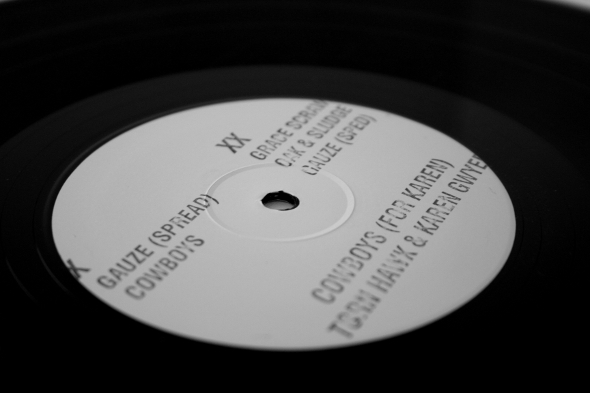 As a multimedia adventurer with many years experience behind him, only in the last couple of years has Luke Wyatt started to take shape as an artist in his own right with choice releases in interesting places. Appearing on L.I.E.S. has no doubt helped his profile, with last years’ Tarifa EP drawing plenty of heat for a performer whose preoccupation with the absurd had previously led to creative energy expended on such ventures as the Weenus Training Loop series.

The music tucked away in the background of those budget surrealist pieces hinted at the compositional skills Wyatt possesses, while at the same time capturing just the right tone of washed-up VHS ephemera to accompany the homespun images and seat-of-the-pants acting. Wyatt’s visual accomplishments have been many since then, with a working live VHS performance in constant demand it would seem, but at the same time his studio adventures are taking a more tangible shape which is no bad thing.

This release for No Pain In Pop is the result of Wyatt being invited to remix a track from the debut album from fellow noise botherer Karen Gwyer; instead of one remix, Wyatt submitted a 35 minute “suite of deformations” and the results are as thrilling as you could hope for avant-garde electronics to be. “Gauze (Spread)” finds a gentle pace to flow at, starting the EP off in a meditative mantra that switches every four bars between the weightless and the grounded but always slowly embellishing the hum of musicality that lurches behind the delicate, dubby rhythmic refrain.

“Cowboys” is a more loose-fit turn that comes on part synth soliloquy, part psych-rock jam. Wyatt has always hinted at his gift on the guitar, but rarely has it shone so clearly in the front of the mix as on the learned squall that commences the track (assuming of course that it is him shredding the axe in that instance). A few minutes in and the drums start to take hold with a steady cyclical motion, one-note arpeggios only reinforcing the kinesis and illustrating just how gelled together in sonic muck everything on the release is.

“Grace Scrawl” employs the same rhythmic trait as the opening track, using regular flicking between two different frequencies of drone to create movement in an otherwise ambient situation. However this time around the rhythm is used as a backdrop to more guitar-based acrobatics, played through a languid signal chain that lends itself to the tripped-out proceedings. After the more sleazy tones of shorter piece “Oak & Sludge”, the record rounds off with “Gauze (Sped)”, a return to that aforementioned riddim once more except this time over a more prominent drum track that brings the first whisper of urgency to Wyatt and Gwyer’s musical mission. There’s an almost trap-like flutter to the beats, but most notably the ramp-up in energy inspires greater movement in the synthesised elements of the track, the arc of intensity slowly rising but never getting near a traditional kind of peak and/or trough.

There’s much to take from a record such as this, both appealing to the instinctive response to repetition that dance music is built upon, and reaching for a more spiritual level of communication that remains ill-defined – a certain quality locked within the harmonious mulch that the lo-fi production cultivates but which sings straight to your soul regardless. When the music can do that without demanding some form of dedication or concentration, it must be working.