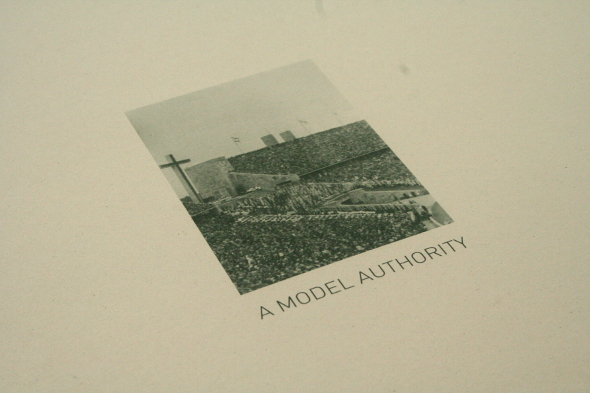 Model 001 sees two of the UK’s most respected new techno producers in Sigha and Shifted collaborate for the first time together as A Model Authority. Can they work together harmoniously or will it end in a mixture of beer, blood and broken glass like other underground techno super groups before them?

On the evidence of this first release, it would appear that A Model Authority will be a fruitful relationship. Like Lucy and Speedy J’s Zeitgeber project, Model 001 brings both parties’ talents to the fore, instead of one dominant producer overshadowing the other. Both producers have stepped outside of their comfort zone while leaving traces of their usual sound. In Shifted’s case, it’s the blast of white noise interference that constitutes “Etched”, the sonic equivalent of dry ice being let off, while for Sigha, the sound of a cockney geezer waffling against the backdrop of noisy, scratchy textures belies his love of Situationism as interpreted by Birmingham techno.

But it is the deviations rather than familiarity that prove so alluring. “Collapse (Rhythm)” is more similar to Sigha’s work, but its thick layer of distortion pitted against a hollow broken beat and swinging percussion make for a fascinating combination. “Cycles of Violence” sees Shifted discard his streamlined approach as the pair delivers a growling bass and jack-knifing hats as an accompaniment to the sound of the wind howling in the background.

Both producers also let down their guard on “Pieces of Me”, the release’s highlight. While in keeping with the pounding techno of artists like Truss/MPIA3 and some of the Avian material, it is less frenetic. Sure, the kick drums are pushed into the reds and the low frequencies also start to distort, but they are reigned in by miltaristic snares and the kind of wild analogue bleeps that characterised mid-90s Landstrumm and Vogel releases. Who knows how A Model Authority will go next or if it will end with a dramatic bang, but as far as first steps go, Model 001 soundtracks a relatively painless birth.

A1. Pieces Of Me
A2. Etched
A3. Collapse (Rhythm)
B1. Cycles Of Violence
B2. Depford Blues (Excerpt)